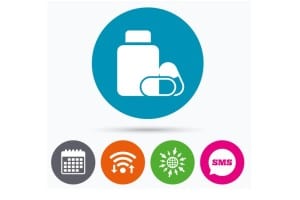 To help address the problem of prescription theft, Intelligent Product Solutions of New York helped to design a smart medicine cabinet called iKeyp, which provides real-time security alerts through a wireless Internet connection when the cabinet is breached without a successful combination. The cabinet also issues reminders to take medication.

“It’s similar concept to an alarm system, but restricted to a medicine cabinet,’ said Gianfranco Bonanome, senior director at IPS. One example of its use is for a patient with a long-term opiod prescription. Perhaps the patient’s friends know there are opiods lying around, and the smart cabinet prevents theft.

AdhereTech in 2016 won the GOOD DESIGN Award, the world’s oldest prize dedicated to the most innovative industrial products and graphic designs produced around the world.

The pill bottle also serves to protect healthcare providers. Under U.S. healthcare law, if a patient is hospitalized for any reason, then returns to their place of care within 60 days, the care facility must prove that proper care was administered.
In addition, pharmacies may want to protect themselves against lawsuits in situations where it’s difficult to prove the patient didn’t take their medication.

Intelligent Product Solutions has also developed wire-free charging strips, a DNA-based optical scanner for security, and other products. But designing products for the medical industry presents different challenges, said Bonanome, who will be speaking about designing intelligent IoT devices for healthcare at IoT World from May 16-18 in Santa Clara.

In healthcare, Bonanome said, the FDA has strict design, testing, and review requirements.

Engineers, he said, don’t want to waste time redesigning products. So designing intelligent IoT products in healthcare involves meeting those standards – including measuring the device and components against similar products. In the meantime, engineers and designers must ensure the product doesn’t become obsolete by the time it finishes the FDA process, which can take years.

As such, IoT healthcare products must be “future-proofed,” Bonanome said.  IPS seeks components “that will be available for as long as possible on distributor’s shelves. This is primarily done for two reasons: To push obsolescence management as far as possible into the future, and to avoid re-certification.”

“Traceability on components is a key aspect of FDA certification,” he explained. “Any significant changes to a bill of materials will result in having to go through the process (or part of it) again.

And especially in healthcare, the products must have real value.

“We’ve become addicts of tracking things,” Bonanome said.  “It’s a little bit like sports — you can create a statistic around anything, but is it really adding value of the end of the day?”

Predictive healthcare: How the IoT can save lives

Use cases: healthcare and real-time analytics