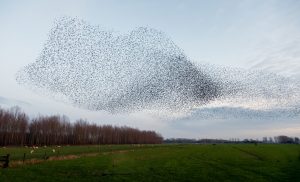 AI swarm systems draw input from individual people or machine sensors and then use algorithms to optimize the overall performance of the group in real time.

If you have ever stooped down and closely watched an ant hill,. you will see one of the most efficient and well-tuned enterprises on the planet. There are no silos and information about threats or food is quickly transmitted across the collective.

As individuals, insects aren’t the smartest creatures on the planet, but when bunched and synced together, they are a force to be reckoned with. Ants form highly efficient colonies, with intelligently networked defense mechanisms and food supply chains. Using real-time artificial intelligence, human organizations may be able to work in a similarly efficient manner. Ant colonies — or beehives — make great models for artificial intelligence-based systems.

That’s the gist of a recent analysis published in MIT Sloan Review, which posits that intelligence based on “swarms” of human and machine data feeds can replicate the group intelligence of insects and birds, in which the whole is much greater than the sum of its parts.

“Swarm intelligence is a form of AI inspired by the insect kingdom,” relates the authors. Mark Purdy, Ray Eitel-Porter, and Max Klymenko, all with Accenture. “In the world of AI, swarm systems draw input from individual people or machine sensors and then use algorithms to optimize the overall performance of the group or system in real time.” For example, the authors illustrate, swarm intelligence can potentially predict everything from the outcome of sporting and political events, as well as fashion trends.

Examples of swarm intelligence in action right now can be seen with the Waze app and within an AI system serving London’s Gatwick Airport.

Waze, a traffic navigation app. “uses swarm intelligence to create and modify maps. It began making tweaks based on its users’ GPS data along with manual map modifications by registered users. Entire cities have been mapped using this method. And just as ants signal danger to their counterparts, so too do Waze users contribute live information from accident locations and traffic jams.”

At Gatwick, a swarm intelligence system helps improve efficiency against the backdrop of growing airport demand and capacity constraints and reduce flight disruption. The system, called FlightID, “collates all ground data on factors that typically affect departure times,” such as weather changes or staff shortages, Purdy and his co-authors relate. Rather than looking at the average flight delay across the airport, the swarm algorithms learn about each individual flight’s performance, down to the gritty details of how a specific airline tends to perform on rainy days.” As a result, Gatwick saw improved performance, helping an additional 1.5 million passengers depart on time in 2018.

Swarm technology is made technically feasible as small devices now support greater local processing and data storage, combined with advances in internet of things (IoT) technologies, machine learning, and 5G, according to Purdy and his co-authors.

Focus on a key operational goal. “A swarm of ants can locate food over a massive area because they are individually focused on a single goal,” they write. “For an organization, the goal is likely to be a significant area of business performance.”

Integrate into the broader ecosystem. “Beehives and ant colonies do not exist in siloes. They share their knowledge with the rest of the swarm so it can quickly adapt and respond at scale. Similarly, an organization implementing swarm solutions has to make sure that it benefits from the different parts of the organization and its ecosystem.”

Keep it simple. “While swarm technology can be complex, individual agents act best on simple instructions. A swarm system has to be simple to understand and use.”

Keep it human. Remember, humans aren’t as robotic as ants. “Swarm AI should be seen as an aid to worker productivity — as a system to enhance human judgment, not replace it.”