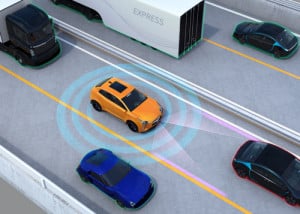 To learn to drive like a human, driverless cars will require massive amounts of data, programming, and computing power.

According to a new report from KPMG, deep learning and other machine learning technologies could significantly change the automotive and transportation industries. By 2030, these advances could be worth $1 trillion.

In the report, titled, “I see. I think. I drive. (I Learn),” Gary Silberg, KPMG’s national automotive leader, outlines a few situations where current autonomous vehicles might stumble: “How do you program a car to stop at a red light? To allow it to turn right after red? Except in New York where it is always illegal? Or where it is specifically forbidden? What if there is a pedestrian in the crossing? What if someone breaks the law and runs the red light in front of you? What if a bicycle comes speeding past you in the wrong direction?”

The idea is that if a vehicle doesn’t have specific instructions about how to behave in certain situations, it might simply force itself to a stop, or do something else that other drivers (or other autonomous vehicles) might not understand.  For example, Tesla recently released a video of its Autopilot technology in action, and viewers noticed a few places where the car unexpectedly stopped, or responded unnaturally to certain stimulus. Deep learning would be used to help cars better understand these situations based on previous results.

Silberg adds: “If a car can’t learn, then it’s still reliant on millions and millions of lines of code, with such complexity and ambiguity, that full autonomy wouldn’t be achievable for many years to come.”

Deep learning works by analyzing a scene in specific layers, which begin primitively and grow in complexity. By learning something about the scene in each layer, and layering that on top of training exercises, the system improves its ability to make the right decision.

Given the same amount of data, deep learning is far more accurate than rules-based, deterministic algorithms, which need to be programmed by hand and rely on basic programming logic, like IF a cat runs into the road, THEN apply brakes. Deep learning is also more accurate than machine learning, which also uses human input to determine the variables, or “nodes,” to stay aware of. These include things like lane markers, guardrails, or pedestrians. Deep learning is capable of taking machine learning a step further by recognizing new nodes, such as nuances in right-on-red rules, and expanding the size of its neural network.

Automakers will have to choose between semantic abstraction or end-to-end learning approaches to deep learning, each with pros and cons. The former is a modular system, and it helps programmers know whether the guardrail detection system or the stop sign detection system is responsible for a certain error. But it requires lots of human programming. The latter is a holistic system that uses massive datasets to identify guardrails for itself, for example, and optimizes based on examples of human driving. It’s potentially more accurate but can be difficult to train and tune properly.

Given that 94 percent of accidents are caused by drivers, the report says, deep learning-enabled vehicles could save thousands of lives. They will also give mobility to those who don’t have it, and make trucking safer and more productive. Reduced congestion, democratized transportation, and productivity increases are all on the docket as well.

How can all that get enabled? First of all, talent is going to be critical. Very few people are capable of creating deep learning systems, and they will be in high demand in the coming years. Google, Microsoft, NVIDIA, IBM, and Intel have already scooped up the majority of them, and universities are having trouble creating enough graduates. Automakers might also need to address a new car ownership model based around ride sharing rather that personal ownership. OEMs will also have to dramatically increase the computing power inside vehicles themselves, which will likely result in GPU-powered onboard systems to analyze vast amounts of data.

Is all this worth $1 trillion? Considering the host of benefits for companies that get deep learning right, both in the vehicle and among the rest of their business, it’s not hard to imagine that figure becoming even larger.

Self-driving cars may never happen, but driverless trucks might