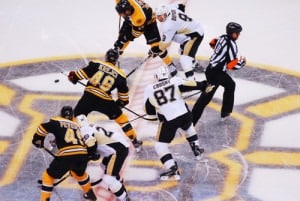 The plan builds on the NHL’s previous playoff season test where they equipped teams with iPad Pros that generated real-time video highlights and analytics.

The NHL will soon face off with real-time, on-ice analytics, thanks to a partnership between the NHL and SAP. Beginning after January’s All-Star game, every club’s bench will receive iPads that will provide access to dozens of real-time statistics for every game.

The program stems from a pilot test during the NHL’s 2017 playoff season. Each team received three iPad Pros which provided real-time video highlights. The league extended that test to all teams for the 2018 season. Now teams will get a fourth iPad which coaches can use to supplement on-bench video and guide snap decisions without requesting a time-out.

The NHL’s team of business development and innovation people collaborated with Apple and SAP to design and build an app that produced the analytics and data points coaches needed. The new iPad grants coaches access to 30+ on-ice stats including face-off success rates and on-ice time.

SAP’s HANA cloud infrastructure powers the completely customizable app. Coaches can choose to integrate insights with video, too. A user-friendly dashboard displays the insights, which also include:

The data is gathered via RFID chips embedded in pucks and player pads and can collect data at a rate of 180 times a second.

“The NHL is excited about introducing technology in new and exciting ways,” says Robert Rob Bendl, SAP North America’s vice president of strategic customers and innovative business solutions. “We look at this as a solution that will be foundational. We’re excited that this platform will allow them to grow and expand as additional analytics are available through puck and player tracking.”