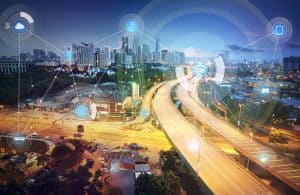 A smart infrastructure can play a role in many smart city applications including traffic management, healthcare planning, and more.

Smart infrastructure is the key to maximizing the benefits of smart cities. They facilitate data transport, data analysis, and provide back-up information for power plants, vehicles, and even traffic lights. Instead of having the city run by a single supercomputer hidden in the sewers, smart cities could be run through a distributed set of computers hidden within the city’s infrastructure.

A smart infrastructure offers endless options and possibilities. For instance, traditional signage serves one purpose only: to inform human drivers how they should behave.

A traditional stop sign’s function is to tell drivers to stop, but what does a stop sign look like, and what else could you expect of the stop sign? First of all, not all stop signs say “stop” and look like red octagons. Japan uses an inverse red triangle, Bhutan uses a red hexagon, and Vanuatu uses a red circle.

While some of these places look exotic to some of us, autonomous vehicles do not care where they are and need to recognize the stop sign, even if the stop sign is not a red octagon, or is obscured by dust or snow, or is transfigured. This could be accomplished with a solar-powered sensor that signals the autonomous vehicle to stop. Yet a sign could do so much more. For example, a sufficiently powered sign could download information about places of interest, road quality, traffic conditions and could conversely sense and collate traffic and weather information to a database, and provide pedestrians and parked vehicles with power charging stations. They could even reroute autonomous vehicles when a traffic jam develops or as needed.

This may sound like science fiction, but companies are already experimenting with smart infrastructure. For example, Volvo tested magnetic roads in 2014 that can sense and guide connected vehicles. While the results were favorable, it proved too expensive to be practical with 2014 technology. WiTricity is adding power pads to parking spaces that allow an electric vehicle to charge wirelessly. The parking space is no longer just a slab of cement but also serves as a power station. The Swedish firm Elonroad is expanding the idea of wireless charging by installing conductive rails to roads and parking spaces that charge electric vehicles (EV) as they drive or park, which increases the EVs’ range and makes EVs with smaller batteries more viable.

There are already efforts to partner companies with cities to build smart infrastructure. Cavnue is working with the Michigan government, automotive firms such as Ford, and universities such as the University of Michigan to build a “connected corridor” between Ann Arbor and Detroit. According to Cavnue’s website, this corridor will use “physical, digital, coordination, and operational infrastructure to accelerate and realize the full potential of connected and autonomous vehicles to make roads safer, less congested, shared, and sustainable.”

The smart infrastructure’s role in traffic is only one aspect of the smart city. What this article discusses is that an item’s description is not its sole role. A stop sign could be more than a flat sign. It can collect traffic information. We already have trash bins that can connect to the Internet and run on a solar charge; we can go one step further and have them act as Wi-Fi hotspots that link to the signs and contribute energy to the smart city’s grid. These signs and trash cans can connect wirelessly to inhalers equipped with GPS devices to see if one area has low air quality, and the smart infrastructure can use that information to predict how many people will need healthcare and tell the hospital how many beds should be opened up. Altogether, these individual pieces could be part of the breathing organism that is the smart city.