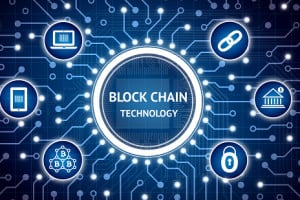 Cybersecurity is a significant driver for blockchain adoption. It could provide the security layer companies need to trust their operations from IoT to robotics applications.

Robotics is transforming everything about our world, from emergency services to manufacturing to surgery. What happens if these vital robotic assistants are hacked? The consequences are too high to risk their security to just any methodology. Still, blockchain could be just what the robotics industry needs, according to a recent study from researchers at MIT and Polytechnic University of Madrid, which was published in IEEE Transactions on Robotics.1

The researchers note that blockchain offers a tamper-proof transaction record. As follower robots follow team leaders, they’ll identify any inconsistencies in messaging. Hacked robots manage limited damage and reach, thanks to a token system. Robot leaders signal movements with tokens and record their actions in a transaction on the ledger. Robots caught in a lie forfeit the tokens they need to signal further.

Securing communications remains a vital part of deploying robotics on a large scale. The study offers potential solutions for multi-robot systems, such as in cities where self-driving cars deliver goods or move people.

Although blockchain’s most famous usage lies in cryptocurrency, general cybersecurity is a significant driver for blockchain adoption. In robotics, it could provide the security layer companies need to trust their operations to IoT and robotics applications.

Blockchain works by converting information into a string of unique letters and numbers. Each “block” contains information about its current transaction and the previous block’s transactions. Malicious actors changing the hash will disconnect from the chain, limiting damage and preserving the transparency of activity.

Blockchain also helps protect against human error. If one robot leader issues a command that varies from the majority commands, the robot can check the transaction chain and behave accordingly.

The team notes that using this system allows developers to estimate the potential spread of malicious activity (or its lack) and the logistics required to operate the chain of transactions. In the future, they hope to build off this system to enable new security benefits that ensure no robotic system can ever go rogue.