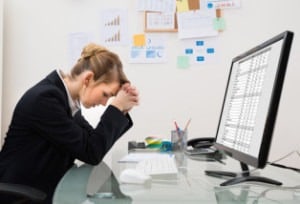 A third of the time spent using spreadsheets is wasted due to repetitive work and manual processes that could be streamlined with better data prep tools.

Just about every business uses them, but they’re responsible for $60 billion in wasted productivity every year in the U.S., according to a new study from IDC. And despite these obvious negatives, they’re not going anywhere.

They’re are used in just about every industry, and for a wide variety of tasks. It’s not just accountants who spend their days in spreadsheets — anyone interested in collecting data and transforming it into useful insights spend — and waste — their time in Excel and its competitors day in and day out.

But in an era of digital transformation and self-service data preparation software that’s designed to help workers of all types get data into their analytics systems faster and with more reliability, it makes sense to take a step back and consider not only what’s lost by sticking with the spreadsheet, but also what could be gained by adopting new technology for ever-increasing analytics needs.

The advanced spreadsheet user and their qualms

The IDC study, sponsored by Alteryx, found that 8 percent of all enterprise employees could be identified as “advanced spreadsheet users.” That equates to 5 million people in the U.S. alone, and 21 million worldwide. These users spend about 26 hours per week in their spreadsheets, which means that a majority of their workweek is directly affected by the speed and capabilities of the software they’re using, whether that’s Excel, or an alternative. With 5 million advanced spreadsheet users in the U.S., that equates to 6 billion hours per year.

Of those hours spent in spreadsheets, a little less than a third of the time is completely wasted due to repeatable work and manual processes that could be streamlined if employees had access to better tools.

These advanced spreadsheet users are still getting serious work done, however. Sixty percent of the survey respondents were focused on data integration, followed by 47 percent doing ad-hoc data analysis, and 34 percent doing data visualization. They spend a majority of their time on what-if analysis, cleansing, and prepping data for PowerPoint. Of all the spreadsheet functions available to them, these users are most likely to focus on summarizing and manipulating data, using conditional statements, followed by more advanced statistical calculations.

Aside from the wasted time in performing different processes on spreadsheets, there’s also wasted time due to troubleshooting or rework involved in data preparation processes that result in error or create compliance issues. Surprisingly, 81 percent of the survey respondents said that they use copy-paste as the primary method of data acquisition into spreadsheets, with importing delimited data being used only 52 percent of the time. Copy-paste is notorious for creating errors and compliance issues — it can’t be traced, and it’s easy to accidentally to break compliance by pasting data where it shouldn’t be.

Guidelines for preparing for data prep

If so many people are spending dozens of hours in spreadsheets every week, and inevitably running into wasted efforts, why aren’t businesses buying into new data prep software? According to the survey, these businesses were concerned primarily with the potentially lengthy implementation time, followed by compatibility with other applications, and what they perceived to be a high cost. But the business case is infinitely more complex, particularly when it comes to the benefits.

Potentially big cost savings: In the IDC survey, they estimated that every advanced spreadsheet user in the U.S. was costing their employers $12,000 per year. By converting to data prep software, a business can eliminate a good portion of that waste, and potentially have the software “pay for itself” via improved productivity.

Eliminate ““panning for gold’: With old data prep processes and tools, such as Excel, many companies feel like they’re wading through a vast sea of information without gleaning any useful insights. Instead, data prep tools can point employees in the right direction and make their work more likely to generate useful insights.

Consider a spreadsheet-free workplace: Businesses should consider all the positive and negatives of working in spreadsheets. For example, every device and operating system has a method of opening and editing spreadsheets, creating excellent interoperability, but it’s hard to maintain compliance of the data within them. If businesses do the legwork, they’re likely to discover that spreadsheets are a net negative to their business.

Account for additional benefits: Data prep software doesn’t exist only to make these processes faster. The business case should also include the other built-in benefits, such as higher degrees of data and analytics integrity. On top of that, an Excel spreadsheet is inherently unfriendly to collaboration — it’s nearly impossible to allow multiple users to edit the same file simultaneously — whereas most self-service data prep tools are built to allow exactly that.

The fact that spreadsheets aren’t perfect for every situation shouldn’t come as a surprise for anyone, but for businesses that are looking for ways to modernize their processes, perhaps it’s time to do a careful examination of a spreadsheet’s total costs — even if it’s not the reported $12,000 a year, it might just be high enough that an alternative makes more sense in the long run.