Home / Cloud / Why Hybrid Cloud and Why Now?
Sponsored by Vertica 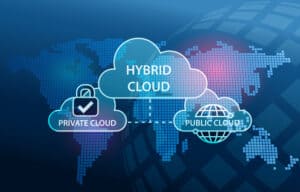 Hybrid cloud deployments are the new norm, allowing workloads and data to run and reside on a combination of on-premises systems, private clouds, and public cloud services.

How much interest is there in hybrid cloud? Some industry surveys found hybrid cloud adoption is on the rise. Roughly half (48 percent) of the respondents in one survey plan to migrate 50 percent or more of their applications to a cloud this year. That aligns with the findings of another survey conducted last year that found that more than a third (38 percent) of the organizations already had a hybrid cloud strategy in place.

What’s driving the interest in hybrid? Hybrid cloud goes well with the embracement of cloud-native development and the composable enterprise. New applications are being built as an assembly of components based on microservices and APIs. Similarly, old monolithic applications are being deconstructed, offering up particular services, code, or data for use in new applications. A hybrid cloud strategy allows businesses to run different elements of such distributed applications where they would run best in the most cost-effective manner.

Digital transformation is another driver for the adoption of hybrid cloud. Digital transformation is about developing innovative offerings quickly and meeting customer availability and app performance expectations. A hybrid cloud strategy makes that all possible so that software developers can iterate as quickly as possible without having to wait for IT to set up servers, storage, and networking on-premises. Yet, it allows a business to keep apps and data that need to be secured on-premises.

Hybrid cloud also gives businesses the ability to place and shift workloads and data to the right infrastructure as requirements evolve. For example, it might make sense to move data on a public cloud back on-premises or to a private cloud if data privacy regulations are strengthened in a particular region. Similarly, an AI or ML model might be proven out on-premises but moved to a highly-scalable public cloud when deployed in production so that the needed compute power is available.

Such deployment flexibility is increasingly essential. Some applications will be best targeted to one type of cloud early in its development life cycle, only to have that shift to another later on. For example, it is quite common for a new consumer application to have wildly varying demand when first released, but over time to have its usage settle. A hybrid approach gives a business the option to use a public cloud to quickly scale and meet surges in demand but then bring an app back on-premises when demand plateaus to reduce costs.

See also: Moving Your Data to the Cloud? Read This First

Hybrid cloud past, present, and future

The old adage “what’s old is new again” rings true for hybrid cloud. Back in 2009, the National Institute of Standards and Technology (NIST) started developing a working definition of cloud computing. After 16 iterations, it finalized its work, noting that multiple deployment models included private, public, and hybrid, which together offered a new way to deliver services.

The NIST touted reasons for using hybrid cloud back then were that “cloud computing is a model for enabling ubiquitous, convenient, on-demand network access to a shared pool of configurable computing resources (e.g., networks, servers, storage, applications, and services) that can be rapidly provisioned and released with minimal management effort or service provider interaction.” And it noted that organizations that used cloud were more likely to reap the promised benefits of cloud—cost savings, energy savings, rapid deployment, and customer empowerment.

It is safe to say those insights hold true today. But what of the future? Hybrid cloud reflects enterprise IT’s overall and ongoing shift from a centralized to a distributed model. And perhaps the best indication of hybrid cloud’s value going forward is the synergies it brings with edge.

Edge is exploding. Sensors, IoT devices, and other data-producing units provide status and operational data for everything from an IT device to equipment on a production line to a pallet in a tracker trailer. Rapid analysis of that data is key to many aspects of business operation.

As such, there is a great overlap between hybrid cloud and edge. Hybrid cloud is about running workloads in the best possible environments; edge computing is about bringing the environment to a workload and its associated data.

Hybrid deployments are the new norm. Most businesses are shifting workloads to the cloud or building new cloud-native applications from scratch. With few exceptions (e.g., pure cloud-native startups), workloads and data will run and reside on a combination of on-premises systems, private clouds, and public cloud services.