Home / Use Cases / Customer Experience Management / In Barcelona, Every City Bus Will Be a ‘Tech Bus’ With WiFi 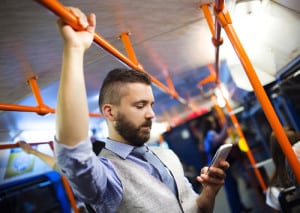 Aptilo Networks says it’s possible to offload up to 30 percent of cellular data traffic to Wi-Fi.

When it comes to smart cities, it’s hard to do better than Europe. Hitachi Insight Group is building out an IoT network for Copenhagen to help citizens track their carbon footprint and how they use various modes of transportation. Both Spain and France have IoT networks that span almost their entire countries using low-power wide area network (LPWA) technology, and cities in the Czech Republic and Finland are outfitted with smart waste control systems. Now, Barcelona and Aptilo Networks are taking these innovations even one step further.

The Barcelona Wi-Fi deployment, already one of the largest in Europe, has just been expanded to include the city’s entire fleet of 1,003 buses. The Wi-Fi network already covers most of Barcelona City via more than 1,110 access points at prime locations, and will now be accessible to those jetting about on public transportation.

According to Paul Mikkelsen, the CEO of Aptilo Networks, Barcelona’s Wi-Fi network must deal with 1.6 million regular citizens, plus a whopping 7.5 million tourists who visit every year. This can create bandwidth issues, particularly during certain times when use is highest.

In addition, Barcelona’s Wi-Fi is restricted to speeds no higher than 256 Kb/s at outdoor locations, due to government regulations. This is meant to ensure that this public Wi-Fi implementation doesn’t alter the private marketplace, and discourage citizens and tourists using the system for applications beyond browsing the web. But, Barcelona City Council websites can always be accessed at unlimited speeds, and if one gets off one of the new buses and enters certain public buildings—such as museums or libraries—they’ll get unlimited access there as well.

The SMP platform is responsible for handling all these particular needs, such as controlling bandwidth and allowed connection times depending on the hotspot location and type. Users can register for the network via a captive portal, and then have to work through a one-time activation process that connects their device to their account. After that, they’ll be automatically connected to any available Barcelona Wi-Fi hotspots.

Aptilo’s product offers a number of unique services, one of which is offloading of mobile data. The company claims that based on its previous implementation, it’s possible to offload up to 30 percent of cellular data traffic to Wi-Fi. On top of that, users just simply prefer to connect to Wi-Fi if it’s available, in part because many applications refuse to work or download new material while on a cellular connection.

One key to successfully offloading mobile data is ensuring a seamless user experience that also maintains a certain degree of security. Aptilo SMP includes SIM-based authentication for devices that use one. Because the SIM authentication process must use encryption to send and receive data, any content that follows will be encrypted as well. According to Aptilo, that means the Wi-Fi network becomes as secure as a mobile network. This should reduce the typical concerns about connecting to public Wi-Fi and the common workarounds, such as connecting to a VPN to ensure an encrypted connection.

Aptilo claims that “some of our customers have used our platform for M2M communication long before the IoT term was invented,” so it will be interesting to see if Barcelona City Council decides to piggyback more “smart city” resources—such as streetlights or traffic lights—onto the newly-expanded Wi-Fi network as an ad-hoc IoT platform.