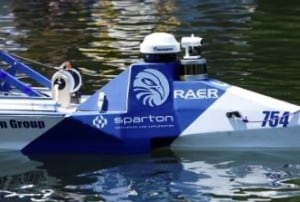 Organizations as large as the U.S. Navy and Rolls Royce will indeed bring innovations such as autonomous submarines, but hobbyists, academics and students are also keys to innovation.

Technology is not just for rich people and governments. While history is filled with the Alexander Graham Bells who create the telephone and the Henry Fords who mass-produce automobiles, people often forget the smaller projects.

There were the fun early moments in the history of the Internet of Things (IoT), such as the Carnegie Mellon students who created a program back in the 1980s that allowed them to track whether their favorite Coca-Cola dispenser had soda in it and whether it was cold through the Internet. There were the “phreaks,” college students and engineers who learned how to manipulate the late 20th century phone system into giving them free conference calls and teaching them a great deal about how telecommunications worked. You will not learn the future if you look only at how governments are modifying the IoT. Unknown hobbyists, students and academics make their own mark on the history of technology.

For example, one autonomous boat is the Seacharger, a boat the size of a person made by hobbyists to travel from California to Hawaii with little more than solar panels, a motor and a few other gadgets designed to make it go. After its successful trip to Hawaii, it was supposed to travel to New Zealand and went 6,480 miles before its rudder died. This is amazing. Whereas the U.S. Navy’s Sea Hunter costs $15,000-$20,000 to run on a daily basis, the team that ran the Seacharger only spent $.30 per message, and since it sends a message once every two hours the boat cost the team no more than $3.60 per day. 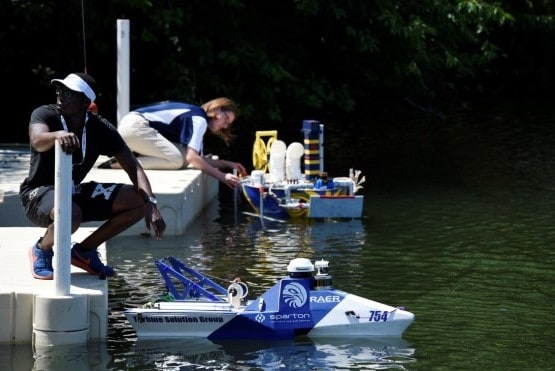 An autonomous boat created by a student team for the RoboBoat competition in Virginia Beach, Virginia. (Source: WikiMedia)

Autonomous boats on a budget

Whereas the Sea Hunter and its naval brethren have many complicated tools designed to help them perform tasks such as hunting submarines and transporting cargo in the crowded seas, the Seacharger is not designed to interact with other ships at all. The hobbyists basically tell their ship to change direction if they see websites noting that there are boats in the area. This reduced cost does make things more difficult however. While the Sea Hunter can do 27 knots with its two diesel engines, the Seacharger can do only 2.5 knots in calm waters. It is amazing what they have done with such a small budget. 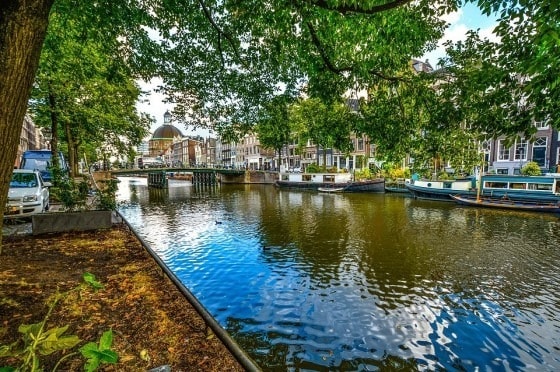 Imagine this canal in Amsterdam, with a number of boats acting as an improvised bridge in times of high traffic. Source: Pixabay)

Another interesting project is the ROBOAT project, a research collaboration between the Massachusetts Institute of Technology (MIT) and the Amsterdam Institute for Advanced Metropolitan Solutions (AMS) in the Netherlands. This group is dedicated towards creating a fleet of autonomous ships, or “roboats,” that can be used to research urban waterways and how to use them to improve the quality of urban life.

Just as autonomous cars transport goods, fleets of autonomous ships can transport goods and people in cities such as Amsterdam, a fourth of which is covered in water, where waterways are one of the main methods of transportation. This project also envisions a form of “dynamic infrastructure” where temporary floating ships can create “on-demand bridges or stages” that can be created and disassembled within hours. The organizations also want this project to investigate the quality of the water itself and learn more about climate adaptation. The first roboats should be sailing sometime this year and the first phase of the project is designed to last for five years.

[ Related: Why autonomous motorcycles are destined for the road ]

There is a range of relatively small projects that hold their own promise. ENSTA Bretagne, a graduate and post-graduate engineering school and research institute based in France, created a ship capable of changing direction upon impact.

The FishPi tackles automation from another perspective; its creators installed a webcam to better track its progress and a Rasberry Pi to control it. A particularly impressive piece of work is N3m0, an autonomous boat made up of store-bought parts such as a compass and 3-D printed parts. The appeal of this boat in particular is that it can be created cheaply by students and “citizen scientists” to measure salinity, temperature and dissolved water. Most of these boats have instructions online so people can learn how to make these ships, helping popularize the automation of boats among people who lack the funds to create attack submarines or freighters.

Hobbyists, academics and students are key to innovation in the Internet of Aquatic Vehicles. Organizations as large as the U.S. Navy and Rolls Royce will indeed bring us innovations such as autonomous submarines that can go underwater for years at a time, those organizations need to spend millions if not billions of dollars to create their innovative technologies.

By comparison hobbyists, academics and students can make less expensive innovative products. This brings to mind the movie industry, where films are increasingly divided between large, expensive blockbusters and smaller independent films. Every year the major U.S. studios spend hundreds of millions of dollars on films such as The Avengers hoping for a high reward. This leads to a problem where studios spend large amounts of capital to make a profit. For example, The Avengers cost $220 million to produce plus marketing costs; luckily it made more than $1.5 billion.

Not all films are so lucky. For example, 47 Ronin cost $175 million to make plus marketing, but it did not make back its budget. By contrast an independent film has lower risk and potentially high rewards. A film like Get Out only cost $4.5 million to make, which meant that if the film did badly at the box office it would have been less catastrophic to the studio that made it. Instead of failing, the film made $252 million.

Think of the Navy as being analogous to a big studio and the hobbyist as an independent filmmaker. We should encourage low-budget research and development because hobbyists, academics and students show you do not need a naval budget to innovate, and they also show they can make innovative products that are available to the common man.