Home / Internet of Things / Accident Avoidance: Can IoT Make You a Safer Driver? 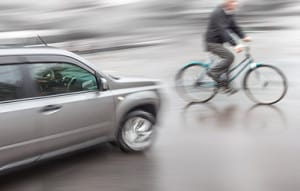 Accident avoidance technology in connected cars can help make the roads safer, but it’s not yet flawless.

This just in: It’s dangerous to drive.  “Last year, the U.S. had the highest one-year percentage increase in traffic deaths in half a century, according to 2015 data released Wednesday by the National Safety Council (NSC). Initial estimates, which may be revised when more information becomes available, indicate that 38,300 people were killed on U.S. roads in 2015, and roughly 4.4 million sustained injuries that resulted in medical consultations. The number of deaths rose 8 percent from 2014, compared with a less than 0.5 percent increase between 2013 and 2014 and a 3 percent drop the previous year.”

Technology is supposed to put an end to many of these accidents. Using the latest IoT technology, accident avoidance technology can stop your car before you plow into the car in front of you. Or, it can see cars in your blind spot, or even park your car for you.

Of course, not everyone can afford this technology, and right now it’s only on the newest model cars.  Statistically, we’ll go through more loss of life before IoT can make things better.

That said, IoT technology is leading the way to safer roads. Smart road technology can sense hazards, such as ice and rain, and automatically slow traffic. New road sensors can provide real-time data from roads and highways to help divert the flow of traffic away from areas where a hazard exists. French IoT startup, HIKOB, is exploring the traffic flow possibilities in several French cities, and many other IoT startups are studying the traffic flow problem as well.

But, what if the cars can reduce the risks themselves? Lately we’ve been all about self-driven cars that can avoid accidents by never taking the computer’s eye off the road. It’s really about using sensors to stop the dumb stuff, such as not seeing the car in front of you because you’re texting, or departing a lane at 70MPH. IoT has the ability to provide stop-gaps that prevent dumb mistakes which could cost your life, or the lives of others. With the cost at a few hundred dollars per car, it’s a no-brainer.

But concerns exist. In a recent accident involving a Tesla Model S in autopilot mode, it was determined that the car failed to brake even though the autopilot was engaged, which should have automatically stopped the car from hitting a truck that was turning in front of it. Tesla has said that the autopilot system failed to see the white truck against a bright sky.

Of course, Tesla’s autopilot is not self-driving, and drivers are supposed to keep their eyes on the road while operating in autopilot. This leaves open the question if IoT devices built into cars can fail, either the automation, or the sensors that are gathering the information. The bottom is line is that IoT devices that are there to avoid accidents must be used with common sense. They only reduce but do not eliminate, the risk — at least for the time being.

The good news here is that car owners can now buy cars that will have the potential to save our lives and the lives of others. Moreover, these features could eventually be mandated to be installed in new cars sold in the USA.  However, it’s going to take time for this technology to be pervasive. And it’s never going to be flawless.

With automated decision-making, what happens to BI professionals?

Dealing with ambiguity: advances in artificial intelligence for the IoT