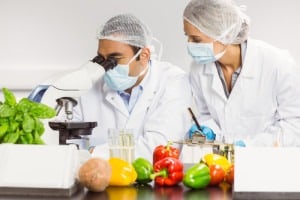 Recently, there was a rash of E. Coli bacteria outbreaks as a result of tainted romaine lettuce that originated from farms in Arizona. These types of events, unfortunately, are common, requiring careful washing and food preparation practices to help minimize. Often, however, the hapless victims of tainted food find out too late.

Blockchain may also help mitigate outbreaks of tainted food products. At a recent discussion hosted at Northwestern University, IBM’s Marie Wieck observed that blockchain-enabled food supply chains provided enough real-time visibility that tracing sources of problems could be conducted almost instantly, versus over a period of days, or even weeks.

Weick explained how IBM had partnered with Walmart to test a blockchain-enabled food supply chain. “Currently, each aspect of Walmart’s produce supply chain — including farmers, processors, and distributors — maintains their own traceability protocols, with many relying on paper-based systems or independent computer programs to provide oversight.”

See also: IBM and food safety — building around the blockchain

As a result, when a food scare does arise, “the company is forced to remove questionable products from all of its 6,500 North American stores as a precaution while it pinpoints potential sources of contamination.” To establish a baseline for the test, a Walmart team sought to trace the lineage of “a single package of mangoes purchased in a Walmart store back to its source grower and distributor in Mexico.”

“Walmart maintains some of the best food supply visibility in the world. It took them almost seven days to trace the exact farm that the exact package of mangoes came from,” Wieck said. “We placed the same query on our blockchain, and received data about the farm, packager, and distributor in two seconds.”

Walmart is now going full bore into putting its food supply chain on blockchain, leading the way to transform the ability of the industry to increase its visibility and traceability.

There are issues the industry needs to address before blockchain becomes a widespread solution. First, there’s simply the matter of awareness and understanding of blockchain. “The array of competing blockchain platforms and various capabilities can seem overwhelming to companies who have little knowledge of the technology in the first place,” relates Judy Fainor, IT expert and chief architect of Sparta Systems, in a recent article in FoodDive.

Plus, the food industry is a highly fragmented one, and blockchain, by design, “requires consensus among network users in order for data to be verified and distributed to others in the network in a read-only manner, which provides a tamper-proof verified history of a food product.” Add to this the fact “there are no definitive standards or regulations that could point food companies in the right direction,” she states. “Moreover, the food supply chain involves so many different companies and agents, it would require serious collaboration in order to instill blockchain technology across the entire supply chain. In order for the technology to actually solve food industry issues, every single actor in the supply chain — from farmers to restaurateurs — would have to buy into the blockchain.”

Walmart is a huge player in the food and retail sectors, so adoption by this and other giants may begin to pave the way to blockchained food supply chains. But it’s going to take some time.