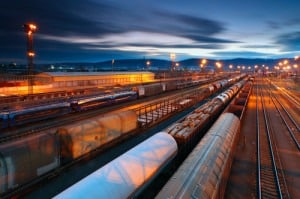 The Opportunity of Challenge Encountered:  An unfortunate crash between a commuter train and a freight train in California in 2008 was the impetus for the US Congress mandating that the nation’s railways implement a nationwide system of positive train control (PTC) technology. However, due to the extensive size and reach of US railroads, implementation has been slow, and expensive for many lines. The Federal Railroad Association funded an analysis of the costs and benefits of deploying PTC technology and estimated annual ongoing financial benefits after completion of between US$2.2 billion and US$3.8 billion. In the meantime, there have been additional fatal accidents, including Amtrak derailments in Philadelphia and Tacoma, as well as on Metro North and NJ Transit in the New York City area.

PTC is a highly advanced system automatically stops trains before certain types of accidents occur — for example, activating braking systems if a train is accelerating too fast around a curve or if another train is on the same track ahead. PTC employs “communication-based/processor-based train control technology that provides a system capable of reliably and functionally preventing train-to-train collisions, over-speed derailments, incursions into established work zone limits, and the movement of a train through a main line switch in the wrong position,” according to the Federal Railroad Administration. “In late 2015, Congress extended the deadline by at least three years to December 31, 2018, with the possibility of an extension to a date no later than December 31, 2020.”

To date, 14 railroads and public transit agencies have completed the hardware portion of the mandate. Another 27 are still in various stages of implementation. FRA states that 76% of freight track work is now sensored, along with 44% of passenger tracks.

Herzog Technologies, a rail signal manufacturer, recognized that many rail lines or transit agencies were too small or budget-strapped to fully implement PTC systems. “A lot of railroads don’t have the staff, the expertise, and, most important, the money to implement the same kind of system as larger Class 1 railroads,” said Travis Rollings, director of office systems at Herzog Technologies in a case study. To help smaller railways quickly meet the PTC mandate, the company decided to use its experience and expertise to build cost-effective, cloud-based hosted solutions.

How the Opportunity was Met: With a hosted solution, smaller railroads could implement PTC technology quickly and at a much lower cost. Herzog chose to build its new PTC solution on a private cloud powered by Red Hat Enterprise Linux and supported by Red Hat Satellite and Red Hat CloudForms. These technologies help with deployment of complete back-end PTC implementations that serve as a backend to a complex Internet of Things system. The company uses its Red Hat CloudForms infrastructure to configure virtual machines and runs Red Hat Satellite to ensure the infrastructure is secure and compliant with various standards.

Benefits of this Initiative: Herzog took advantage of a cloud infrastructure — to develop the automation needed to support its automated PTC hosting solution. Railroads using Herzog’s hosted solution benefit from more efficient performance, including increased reliability and streamlined systems management. In addition, Herzog can now capture important customer data to use for new service offerings, such as real-time monitoring and alerting, with the potential to offer metrics and data-based business insights to customers in the future.

Recently, Herzog completed a PTC implementation for San Diego’s North County Transit District (NCTD). PTC equipment has been procured, installed, configured, and tested on all NCTD locomotives and cab cars and in signal houses and communications bunkers on NCTD’s right of way. Classroom and hands-on training have been performed for management, operations, and maintenance staff.

PTC technology is a move toward real-time access to information, the potential result of which is reduced locomotive failure, more efficient use of railcards and locomotives, and improved efficiency.