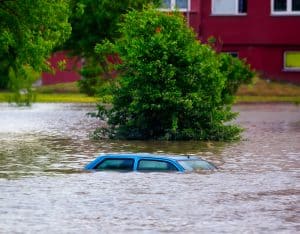 At least for the latter, researchers at Texas A&M University have developed a solution. A prediction algorithm that incorporates city drainage systems and flood gauge readings, which provides a real-time forecast of flood water levels.

With this tool, emergency response and city planning are able to more quickly identify vulnerable areas and dispatch necessary resources.

“Not knowing where flood water will flow next is particularly detrimental for first responders who need to gauge the level of flooding for their rescue operations,” said Dr. Ali Mostafavi, assistant professor in the Zachry Department of Civil and Environmental Engineering.

“Our new algorithm considers the underground drainage channels to provide an accurate representation of how floods propagate. This tool, we think, can vastly help disaster management because first responders will be able to see which way flood water will flow in real time.”

The team built the prediction algorithm on two major flooding events, Hurricane Harvey in 2017 and Houston’s Memorial Day flood in 2015. It tested the model on Houston’s Tax Day flood in 2016 and was able to predict how the flood spread with 85 percent accuracy.

Mostafavi believes that this model can be more accurate and comprehensive than current physics-based models, however, he still sees these models as useful should drainage sensors fail. “Traditional models and our data-driven models can be used to complement each other to give a more precise picture of where flood water will go next,” he said.