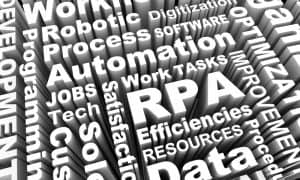 For true, end-to-end digital transformation, companies need to think bigger and make the important shift in mindset from task automation to process automation.

As businesses embark on their digital transformation journeys, how many are fully streamlining their operations? It turns out many are missing valuable opportunities. End-to-end automation is the exception – not the rule. Fewer than one in five organizations have fully automated core back-end processes. These companies are thinking small in terms of task automation rather than process automation. And they are overlooking a chance to gain a competitive advantage.

See also: Are You Getting the Best Results from RPA?

The value of Robotic Process Automation (RPA) to automate menial tasks is understood by many executives. But business processes are considered too complex to automate. A Forbes Global Insights survey found that almost a third (32 percent) of the companies surveyed automate small tasks but still need humans to string the tasks together and check at every stage. Some (31 percent) are linking several tasks together but require humans to orchestrate the groups of tasks. In addition, AIIM found two-thirds of organizations surveyed say that specific core back-end processes are less than 50 percent automated.

“When we started, we took as our benchmark some McKinsey Institute research that said close to 50 percent of today’s menial work can be automated,” said Max Cheprasov, chief automation officer at the U.S. advertising network, Dentsu Aegis. “But based on what I’ve seen across all of the functions and agencies in our network, we’re closer to 75 percent when it comes to rote tasks.” Cheprasov is looking forward to the automation process. “This will give our people the chance to do less robotic tasks and let us succeed as humans.”

Close the gaps with RPA

A narrow focus on automating tasks often results in “swivel chair automation,” or the act of manually copying and reformatting data between existing systems.

“Expectations feed outcomes – if RPA is viewed as a series of disconnected technical projects, the separate implementers sacrifice opportunities,” says research firm, Everest Group. “They overlook the potential to redesign processes to optimize RPA and to design its human workforce so it can best engage with its digital workforce. Carrying out their work in siloed groups, they cannot foresee or manage RPA’s organizational implications.”

Even as companies automate using Business Process Management (BPM) software, they’re still manually executing tasks outside of the process instead of within it. For example, legacy systems still need to be maintained and updated because they’re key systems of records, and this task often falls to human employees.

One way to close such a gap is to complement BPM with RPA. For example, in a complex automated process such as mortgage lending or insurance claims processing, RPA can take over manual tasks such as checking a customer’s identity with various web and internal sources and delivering a report to a human. Combined RPA and BPM give you the power to ensure that your process is highly automated and well-managed from beginning to the end.

The Key to End-to-End Automation is Artificial Intelligence

RPA is evolving past a stand-alone solution to one that harnesses other technologies to take process automation further—as an intelligent automation platform. The combination of RPA and BPM is possible because of artificial intelligence (AI) technologies. With AI technologies such as machine learning, natural language processing, and neural networks, RPA systems can learn which data and content are preferred, identify and extract text and data, and make classification decisions. Next-generation RPA tools embed many of these capabilities, including process discovery, analytics, and content documentation automation (CDA) for capturing data from unstructured documents. With RPA and AI-powered intelligent automation, the bottlenecks inherent to simple process automation are eliminated.

Point solutions are no longer enough for companies that want to achieve end-to-end automation and support their digital transformation strategies. They need the power of RPA and other capabilities such as process mining, process orchestration, and BPM or analytics software – to automate entire workflows end-to-end. In doing so, they’ll reduce the need for human intervention along the way. Smart companies need to integrate solutions that were built to work together in a seamless fashion to increase the value of their automation initiatives.

For true, end-to-end digital transformation, companies need to think bigger and make the important shift in mindset from task automation to process automation. And instead of seeking a point solution, use intelligent automation and RPA. Eliminating the need to manually handle data and simple decisions, they’ll also free up the human workforce to focus on more important work where their knowledge and creativity are most needed to improve customer service and leapfrog the competition.