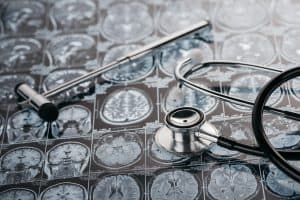 AI shows great promise for the early detection of brain tumors, but it will require more data than any single medical center holds to reach its full potential.

Intel Labs, in cooperation with 29 healthcare and research institutions led by the University of Pennsylvania’s School of Medicine (Penn), are developing an AI model to more accurately detect brain tumors.

The researchers will use a privacy-preserving technique called federated learning, which allows each organization to share data without releasing private information.

SEE ALSO: Accenture, Intel Use AI To Save Coral Reefs

Intel Labs and Penn Medicine published a paper on federated learning in January last year. It demonstrated how the method could improve a model’s accuracy by 99 percent, in comparison to a traditional research method.

“AI shows great promise for the early detection of brain tumors, but it will require more data than any single medical center holds to reach its full potential,” said Jason Martin, a principal engineer at Intel Labs.

“Using Intel software and hardware and support from some of Intel Labs’ brightest minds, we are working with the University of Pennsylvania and a federation of 29 collaborating medical centers to advance the identification of brain tumors while protecting sensitive patient data.”

Penn Medicine has received a $1.2 million grant from the National Cancer Institute for the program.

“It is widely accepted by our scientific community that machine learning training requires ample and diverse data that no single institution can hold,” said Dr. Spyridon Bakas, the principal investigator at UPenn.

“This year, the federation will begin developing algorithms that identify brain tumors from a greatly expanded version of the International Brain Tumor Segmentation challenge dataset. This federation will allow medical researchers access to vastly greater amounts of healthcare data.”

International institutions including the King’s College London, Technical University of Munich, and Tara Memorial Hospital are part of the federation. It also includes universities in Tennessee, St. Louis, Pittsburgh, and North Carolina.