Home / News / IoT World Roundup: From Platforms to the Edge 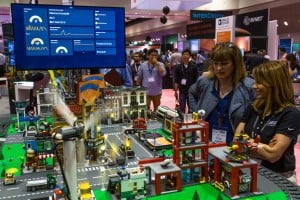 The IoT train appears to be accelerating.

The IoT faces plenty of challenges including business advantage, time to value, security, and interoperability, but those challenges have not stopped the acceleration of new IoT platforms and billions in investment. During IoT World in Santa Clara, CA, companies announced major initiatives and new partnerships:

Cisco may have coined “Internet of Everything” and Hortonworks is fond of saying “Internet of Anything” but how about the “Universal Internet of Things” platform? That’s HPE’s new platform, aligned with the oneM2M standard. The system can send data to endpoints as well as to a main hub and the cloud for analytics. The platform is currently being used for vehicle fleet management, remote meter reading, predictive maintenance, and geolocation.

SAP, meanwhile, announced the roll out of four new IoT offerings for its IoT plaform with partners Dell, Hitachi, Telit and OSIsoft. The offerings focus heavily on edge analytics as well as integration with SAP HANA (an in-memory database) and the cloud, with a focus on smart cities, transportation, and manufacturing.

Hitachi announced it is increasing its IoT efforts with a major investment and the launch of a new IoT investment group and platform. Hitachi Insight Group will focus on strengthening the company’s key IoT verticals: smart industries, transportation and logistics, healthcare, smart cities, and energy. The new platform, Lumada, will be the core infrastructure for all of the company’s IoT solutions moving forward.

While industry observers are fond of saying that IoT’s value lies in services, some announcements showed a renewed focus on device capabilities.

Predixion Software announced the launch of its RIOT platform, which can come embedded on gateways, integrated on operating systems, or even embedded on devices as small as a Raspberry Pi. The system is designed to enable visual edge analytics. See: Reverse engineering the IoT

Electric Imp, meanwhile, announced the launch of its Connected Manufacturing platform. It’s designed to enable mass manufacturing of IoT-connected devices quickly, securely and as cost-effectively as possible. Key components of the new platform include impFactory, which allows companies to secure, configure, track and activate IoT-connected devices during mass production.