Home / Analytics / Is the Carbon-Intelligent Data Center on Your Radar? 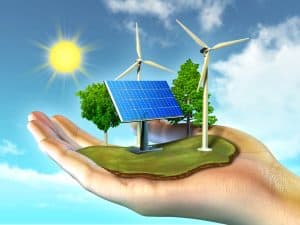 Predictive systems are part of the carbon-intelligent cloud’s future. But proximity to renewable energy sources also plays a key role.

Cloud computing abstracts much of the cost and complexity away from running, maintaining, and operating an infrastructure on-premise. For years, that’s also included the environmental impact of pushing more data, code, and mission-critical processes—think data lakes, real-time streaming analytics, video transcoding, and AI/ML-driven applications—to one of the major cloud providers.

But as technology and software companies look to understand and reduce their carbon footprint, they often can’t blame traditionally “dirty” systems, like manufacturing or physical supply chains. They realize that most of their energy usage comes from their supply chain, not their offices. Their biggest vendor is cloud services in many cases, especially as they seek out more insights using compute-hungry resources.

The era of environmental abstraction is over. The Department of Energy (DOE) estimates that the US now uses 2% of its electricity for data centers, a figure that’s only expected to grow. Tech companies are knocking—figuratively—on the doors of the data centers that power their entire operations. In response, the major cloud computing companies—Google (Google Cloud Services), Amazon (AWS), and Microsoft (Azure)—are racing to be leaders in what some have labeled the carbon-intelligent data center.

What makes for a carbon-intelligent cloud?

Google coined the term back in April 2020, when they first announced a new system for constantly shifting computing tasks toward the data centers that could access the most renewable energy at any given moment. A single data center can increase compute during the day when solar is more plentiful, then shift processes elsewhere at night, when it would otherwise have to rely on less-green sources of energy. Through forecasting, Google’s data centers can optimize workloads based on weather and reserve additional capacity on the cleanest grids.

Predictive systems are certainly part of the carbon-intelligent cloud’s future, but true sustainability efforts started long ago and are likely to continue driving the most zero-carbon impact for years to come. The most common strategies have included going carbon neutral by purchasing offsets or renewable energy credits (RECs) on the open market and pushing for more renewable energy sources.

Location and proximity to renewable energy sources also matter in the searching for zero-carbon. Landsvirkjun, Iceland’s national power company, partnered with Reykjavík Data Center to supply 100% hydroelectric and geothermal power, and Switzerland’s Hydro Power Light runs off 99.9% hydro (with the remaining 0.1% from solar). Amazon claims it’s the top corporate buyer of renewable energy and had 232 renewable energy projects worldwide in mid-2021. Facebook and Microsoft have even experimented with underwater data centers, passively cooled by the ocean itself, theoretically reducing energy consumption.

From there, cloud providers have also worked diligently to improve the operations’ efficiency. Google keeps temperatures at 80°F and uses outside air for cooling, which reduces their reliance on resource-hungry refrigeration systems, claiming to have reduced their overhead energy usage—anything not related to powering servers—to 11%. More efficient custom hardware, like ARM chips, also push down the resource requirements.

Cloud providers and their customers are also drilling down into the indirect emissions from maintaining and updating a data center. That includes the emissions created in manufacturing new hardware, installing it, and figuring out what to do with the antiquated equipment, whether that’s repurposing it in another application or disposing of it as cleanly as possible.

See also: More Use Cases for AIOps as Its Value to Enterprises Grows

How carbon-intelligent is your cloud?

According to a 451 Research report, the best thing a company can do to improve its cloud carbon-intelligence is to migrate to a major cloud provider, which can reduce its footprint by up to 88%. On-premise hardware can’t compete with the raw efficiency of custom hardware, cooling, and purpose-built facilities offered by the likes of Google, Microsoft, or Amazon.

But for companies that have already migrated to a major cloud provider or built their applications natively in the cloud, there are now more tools than ever to understand their carbon-intelligence, forecast their footprint, and make meaningful change.

Google leads the charge in the use of carbon-free energy. It already started offsetting emissions in 2007, and in 2017, the company was already matching 100% of its electricity consumption by producing renewable energy elsewhere. By 2030, Google plans to run entirely on renewable energy, no matter where the data center is located, the workload it is running, or if conditions are favorable for wind and solar generation. Google lets developers choose between different regions and data centers, all with varying percentages of carbon-free energy, to optimize their footprint.

Microsoft is pursuing its 100/100/0 vision for 2030, which means 100% of its energy consumption, 100% of the time, will be matched by zero-carbon energy purchases. In 2021, Microsoft announced a new Cloud for Sustainability software-as-a-service (SaaS) solution to take the lead in transparency around the environmental impact of its customers’ data center usage. CIOs can use this SaaS platform to connect multiple emissions data sources—including multiple data centers—into a single view to easily report on emissions created by their cloud deployments.

Amazon claims to be on target to power AWS with 100% renewable energy by 2025 and net-zero carbon by 2040. In December 2021, the company announced the still-unreleased AWS Customer Carbon Footprint Tool, which will allow AWS customers to view the current carbon footprint of their deployments and forecast improvements as Amazon moves toward net-zero carbon.

As the battle toward carbon-intelligent data centers continue, and all providers reach their zero-carbon goals, responsibility will inevitably turn back toward usage. AWS is promoting a new shared responsibility model for the sustainability of cloud workloads—AWS is responsible for the sustainability of the cloud, meaning everything from electricity sources to water usage to waste products, while the customer is responsible for sustainability in the cloud. They should strive to continuously improve the efficiency of their workloads through new technologies, better storage techniques, minimizing high-power hardware, and more.

While the current trend is to improve the sustainability of the cloud through carbon-intelligent data centers, it’s only a matter of time before users are held to account for inefficient—frequently wasteful—usage due to the inherent abstraction of deploying on the cloud.