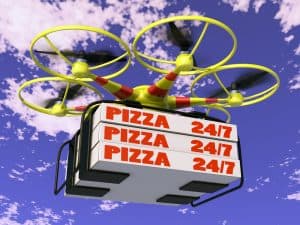 Automating last mile delivery is poised for growth as direct-to-home services become essential to customers and a competitive differentiator for suppliers.

Autonomous package delivery systems are gearing up with Amazon, Google, UPS, and many others using their aerial drones and robots to make headlines. While people write more about how packages are transported from one distribution center to another, packages face different challenges in the “last mile” when they leave local distribution centers. For example, a specialty item that arrives from a plane to Boston, MA, will require different transportation to arrive at a private home in Billerica, MA. This latter challenge is known in the industry as “last mile delivery,” and there are challenges and benefits to automating the last mile.

Automation of the last mile with a drone or robot will eventually make the last mile safer, cheaper, and more environmentally friendly than using a truck or car. There are currently many different drone designs and no single standard. Therefore, companies can associate their design with their brand in the way many associate tissues with Kleenex. Some delivery systems already do this intentionally or not. Starship Technologies’ food delivery drone looks like a “cooler on wheels,” and Alphabet’s Wing drone, which is shown dropping off groceries and burritos with a descending and ascending hook, looks like a mini-airplane.

Autonomous vehicles will still play a role in last mile delivery. Autonomous cars can travel on the road and thus go further than drones, and some deliveries are too large and heavy for small drones to carry. Some packages may make both the short and long hauls in the same truck, and firms such as UPS illustrate that some deliveries can combine drone and truck deliveries. For the companies, autonomous package delivery offers multiple benefits since it allows firms to be flexible when package delivery is impractical given current delivery systems. For example, rural areas are often underserved because businesses find it too expensive to send drivers and their vehicles to make one delivery. This gives companies a way to deliver groceries and crucial medicine during an epidemic. One is delivering prescription drugs in Houston with CVS, UPS is doing so with CVS in Florida, and Wing is teaming up with FedEx and Walgreens to deliver over the counter medicines in Virginia).

Not all last mile solutions have to be purely autonomous. The gita, for instance, is a short, round robot that can carry pizza, party supplies, or any other material up to 40 pounds (about 18kg) while trailing a person. It is being marketed more as a robo-butler than a delivery mechanism, but as a last mile delivery system, it could be used as a convoy to help a deliveryman “carry” more goods.

Opportunities abound for the last mile

Automating the last mile is a new project, which means there are many kinks to work out. These drones need to be visible. Nuro’s unmanned R2 is the size of a car and easily visible, but other robots are quite small. Smaller vehicles such as Starship’s robots are below eye level and can be tripping hazards. The 30 inch (76.2cm) Amazon Scout is designed to blend into the environment with its blue hue and relatively unremarkable design, but it flashes lights to tell people it is crossing the street. It may not be enough, especially when it goes on the road. Aerial drones themselves need to be visible to humans, fowl, air traffic controllers, and airships. While few discuss this possibility, companies also need to ensure the drones do not accidentally drop their packages or themselves on the customers’ vehicles, houses, or heads.

You cannot have package delivery without the actual delivery. Where a package should be delivered is not always obvious. Sometimes the package should be delivered to the end of a long driveway, sometimes to the front door of a house, and sometimes to an apartment on the tenth floor. One solution is for the company to require a human receiver; Starship’s robots only unseal their top when the receiver uses the smartphone app to open it, and Amazon asks that people take the packages out of the Scouts themselves. Alphabet’s Wing uses a hook to drop off and pick up deliveries with the person below doing delivery and pick-up. As a result, many of these services focus on deliveries where they can guarantee a human will pick up the item on delivery, using signatures, cameras, and/or smartphone apps to verify delivery. Eventually, companies will need to figure out how to deliver packages without human intervention; it is conceivable a drone could deliver a package to an apartment balcony on the tenth floor.

Last mile delivery faces the important challenge of stabilizing the packages themselves, particularly when food is involved. It is one thing for a drone to carry a book or football, but when delivering a pizza, you want to make sure the toppings remain on the pizza. Terrestrial robots such as the Starship robot can handle food more easily, but even they need to keep the food in the container, and even a gita carrying a compact laptop can run into a pothole.

Last-minute delivery is not a science fiction concept; it is already here. Some of these companies are still in the pilot stage, but firms such as Flytrex are already serving almost half of Reykjavik, Iceland, and UPS has the U.S. Federal Aviation Administration’s approval to fly as many drones as it wants. Autonomous and semi-autonomous package delivery systems are not yet ubiquitous, but they will be. This ubiquity offers many opportunities to companies. Restaurants may want to consider either having their own drone fleets or renting someone else’s. Autonomous vehicle owners could rent out their vehicles to package delivery services while not using them. Companies need to be aware of regulation before making a large investment. For example, towns might start limiting how many sidewalk robots can be on sidewalks. Private citizens may also want to own drones to pick up their packages. This is a whole new world of opportunity.