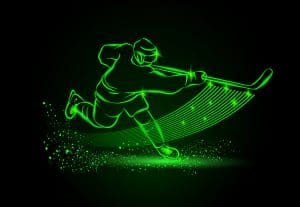 Sensors in pucks, sticks, uniforms will transform coaching and viewing with real-time analytics.

It’s hard to imagine a faster-paced sport than hockey. Other than penalty calls and faceoffs, hockey is pretty much non-stop action for a full hour broken into three 20-minute periods. By comparison, a professional football game may last three to four hours, but the amount of time when there’s actual action occurring on the field pales in comparison to a hockey game.

Now the National Hockey League (NHL) is moving toward taking analytics that can be gathered in real time during a game to a whole new level. The league has already equipped coaches with Apple iPad Pros that allow them to easily analyze video and compare how players match up against opponents. The next step is to add sensors to the puck, sticks – even the uniforms of players – to capture and analyze data in real time, says David Lehanski, senior vice president for business development and global partnerships for the NHL.

Building on Near Real-Time Processing

The NHL already relies on an instance of the SAP HANA in-memory database and SAP Smart Data connector integration software for near real-time processing of data gathered from antennas installed in every NHL hockey rink.

Coaches use that data to optimally decide, for example, which players they employ to kill penalty time when playing one team versus another. Or what specific players should be on the ice, based on the situation at any given moment. This next step will extend that capability in a way that turns the entire game into a massive Internet of Things (IoT) application.

Once everything is connected, the league hopes to not only provide coaches with more actionable insights but to use some of that data to drive applications fans can download on to their smartphones or tablets. NBC, which broadcasts NHL games, may also want to overlay analytics within their live video feeds, Lehanski adds.

This entire NHL initiative got started with the simple idea of bringing Apple iPads to coaches. Apple, which jointly makes available a software development kit (SDK) with SAP, then pointed the league in the direction of SAP to create a data warehouse atop HANA that could process data in near real-time, says Lehanski.

Most teams have already dedicated a member of the coaching staff to analyze the data provided by the league in real time, says Lehanski. Others have gone so far as to set up the equivalent of a mini-data center in their locker rooms to run analytics applications, he says.

The NHL, however, will limit the data it collects from the players to factors such as the skating speed, according to Lehanski. Because of privacy concerns, the league says it has no plans to collect biometric data relating the physical health of the players. For instance, a team could infer that a player may have a nagging injury if their skate time from one end of the rink to another suddenly increases. What data is used could be a negotiation point in future contract talks with the NHL Players’ Union.

None of these next-generation capabilities will be available in time for the Stanley Cup championship game this year. But starting next season, the way professional hockey is played and managed might be very different.

As compelling an example of how real-time analytics can be applied to professional sports, there is one issue that no combination of software and hardware can yet solve, says Lehanski. The video streams being captured are still not precise enough to resolve whether the edge of a puck might for a split second have passed over the goal line. So for now, the final word on what is or is not a goal remains firmly in the hands of all-too-human human referees.