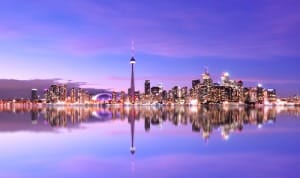 Nokia and Current by GE announced a new partnership in Canada, which meshes the CityIQ platform with Nokia’s communication and IoT infrastructure.

Nokia and Current by GE announced a new collaborative partnership in Canada, which meshes Current’s CityIQ platform with Nokia’s communication and Internet of Things (IoT) infrastructure.

See also: Nokia, AT&T Get Together On Global IoT Deployments

Nokia has already worked on smart city projects at the municipal level and CityIQ is active in San Diego, Atlanta, and Portland, along with a few cities in Europe and Asia.

The Canadian government recently announced the Smart Cities Challenge, aimed at activating technological development through community adoption of smart city policies. The winning city will receive $50 million, with two more prizes for smaller cities under 500,000 population, and one for a city under 30,000 population.

Current and Nokia look to provide the necessary expertise and infrastructure for communities to build out smart platforms, designed to fix local issues.

“We are excited to bring our smart city technology to cities across Canada,” said Austin Ashe, Current’s general manager of intelligent cities. “Nokia’s extensive portfolio of IoT connectivity solutions and successful history working with Canadian cities make this collaboration a great match for Current by GE and our development partners.”

Nokia is also working with Smart City Capital on fostering smart city projects inside Canada, by allowing communities to leverage resources more easily and work with an ecosystem of pre-vetted partners.

“There is tremendous interest in smart city technology throughout Canada, and this partnership will offer Canadian municipalities a scalable method to quickly respond to demographic and economic shifts,” said Shawn Sparling, head of enterprise sales for Nokia in Canada.

“Responsive, flexible technology is key to creating smarter cities while enabling a safer and more sustainable environment. The agreement with Current by GE is a key milestone in our efforts to build a rich and diverse ecosystem of leading suppliers to ensure the delivery of best-in-class solutions for our customers.”