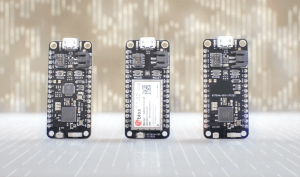 The three devices all offer mesh networking, alongside Bluetooth, Wi-Fi or LTE. Developers are able to choose which standard best fits their needs, Bluetooth for smaller areas, LTE for larger.

Here are the prices:

Particle Mesh reduces the need for a direct link to cloud services. That makes the set-up and running of IoT networks cheaper because devices do not need to be constantly connected through Wi-Fi or LTE to remain active. Particle says that this has been a barrier to IoT expansion for some companies.

The mesh networking also makes the networks smarter, as they can learn from each node and self-heal parts of the network.

“We built Particle Mesh to address a gap in the market: building local networks to connect IoT products to each other without being a networking guru. We’re excited to see what problems our customers solve with this new technology,” said Zach Supalla, Particle co-founder and CEO.

Particle Mesh is built on OpenThread, the open standard for IoT networks developed by Nest Labs.

“Thread was created to support developers in building connected products with a networking protocol that activates the internet in IoT,” said Grant Erickson, President of Thread Group.