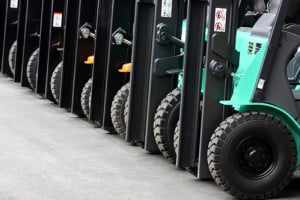 TVH reduced maintenance costs for industrial equipment by 30% through use of a service-oriented architecture, enabling smart fleet management and predictive maintenance.

Predictive maintenance is one of the most promising applications of the Industrial Internet of Things. Industrial equipment is an enormous investment — an onshore oil well can cost up to $15 million, for instance. When equipment breaks down, companies can suffer severe capital and operational losses.

The ability to deliver predictive maintenance capabilities was a leading goal of TVH, one of the world’s leading provider of in-plant industrial vehicles as well as parts. The company also offers rentals, sales and service of forklifts; access equipment; and aerial work platforms. With branches in 30 countries, TVH services more than 25,000 customers in 172 countries.

As part of its effort to move toward intelligent fleet management, the company is transitioning from corrective to predictive maintenance, according to Kalman Tiboldi, chief business innovation officer at TVH. In a report published by the Business Performance Innovation Network in partnership with the CMO Council, Tiboldi outlined TVH’s effort to implement a new IoT-enabled fleet management system.

How This Opportunity or Challenge Was Met:

Because it has tens of thousands of machines and millions of parts, TVH targeted its IoT efforts at making its machines more intelligent as well as enabling the choice of mobile technology and bandwidth for data transmission.

Speed to market is a critical aspect of TVH’s ability to support predictive maintenance, the BPI Network report states. The firm has been able to transform what was formerly a two-step maintenance model — in which a technician diagnoses a fault at the machine and must then dispatch the right part and the right technician to come back to the same spot — to a one-step process at TVH with remote diagnostics.

This initiative is based on an IoT-enabled intelligent fleet management system, where future faults are predicted.

“The nearest relevant technician and part are identified, and even the optimal road routes are mapped,” the report states. Tiboldi also sees an eventual roles for technologies such as augmented reality, artificial intelligence and driverless forklifts. Not only is equipment kept operational, but “their lifespans are lengthened due to small, early interventions and the delivery of parts before malfunctions are detected.”

The IoT-enabled system is built on a service-oriented architecture, which enables quick integration of new assets and systems as TVH’s initiative gains ground. Another initiative that is being tackled as part of the Industrial IoT effort is addressing data governance to resolve “the question of who owns and controls the data produced by industrial machines,” the BPI Network reports.

Benefits From This Initiative:

Applied to its own rental fleet, TVH is seeing reductions in maintenance costs of up to 30%, as well as “a significant increase of the uptime of the machines,” the BPI Network study reports.

With precise usage of rental equipment now known through IoT data analytics, Tiboldi says TVH is on course to reward customers for using their machines “within their ideal load parameters, thus boosting the equipment lifespan.” This also helps ensure the safety of human operators, as well as enable OEMs design equipment which works better under optimal usage conditions.