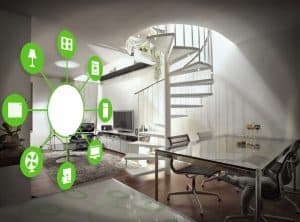 Manufacturers need to develop smart home products built upon a foundation of genuine intelligence and independence. Distributed intelligence imbues devices with these qualities almost by design, helping developers to accelerate the journey into an exciting new era.

Intelligent, responsive homes are becoming indispensable to domestic life, with the number of connected devices multiplying rapidly to 1.3 billion projected subscriptions by 2023. So, it’s important to consider how all of these devices in a smart home operate and work together.

There are three models. The first, the common (not so) smart home model that we are currently used to, is built on the shoulders of devices that outsource all of their intelligence to elsewhere. Each individual device – even the ‘hub’ devices like smart speakers – have very limited intelligence ‘built-in.’ Instead, they all rely on communicating directly with their own cloud networks in order to perform any of the ‘smart’ tasks we demand.

The second model still features ‘dumb’ devices but creates a smarter, more robust home environment. Rather than have each device rely on a spectrum of cloud environments outside the home, this model focuses on a central hub that locally manages interactions with devices installed around the home. That hub then handles all of the interaction with a more limited set of service providers in the cloud, significantly reducing cloud communication, privacy issues, and points of failure.

The third, the zenith of the smart home, would imbue each individual device with the ability to communicate with its peers and think for itself. If we put the smarts in the sensors themselves and create a network of devices that can communicate directly with each other, we remove the necessity for data to be transmitted outside of the home. The central hub won’t be needed here, which means easier installation and possibly faster decision making.

Getting our wires crossed

To illustrate the point, let’s say you’re winding down at the end of the day. It’s time for lights out, and you say, “Hey Google, goodnight!”

In the basic smart home architecture, my Google Home will use its broadband connection to transmit this command to the cloud for interpretation. It will then beam the resulting actions across the world to my smart plug providers in China. This provider will then communicate with the home’s plugs. Every device in this chain is reliant upon the cloud to perform.

This model is inefficient by definition. Each of these devices is working in isolation, requiring interaction with its vendor’s private cloud service just to function individually. Each communication they require is a potential point of failure for your instruction and, in a worst-case scenario, a potential attack surface for a hacker, whether they intend to steal your data or simply to deny service.

There’s also the obvious problem of energy consumption. Each transmission burns energy, as do the lights that you accidentally leave on when those transmissions fail to connect. It’s this sort of incremental increase that sees unused smart items in the home consuming significant energy, even when inactive.

All of these problems are part of the same theme: inefficiency. The ‘not-so-smart’ model for the smart home paradoxically relies entirely on an awkward and unscalable global network of communications. An architecture that is more a reflection of smart home device vendors’ ambition to capture our data than it is to deliver a reliable and compelling user experience.

Bringing the smart home up to speed

The second model of the smart home addresses this by taking some of the intelligence in the cloud and bringing it into the smart home environment in the form of an on-premises hub.

Having a centralized ‘brain’ of the smart home, coordinating smart home devices, dramatically streamlines the basic model. It reduces the number of agents in the cloud and communications with them and facilitates conversations between devices within the smart home itself.

Using this model, my Google Home would receive my command to switch off the lights, would process that command in the cloud as before, but would then execute the resulting actions through peer connections to the devices in my home.

In comparison to the basic model, this system dramatically reduces energy consumption just by streamlining the communications infrastructure for the smart home. There is far less exposure to server outages and cyberattacks, and as transmissions are more likely to succeed, the devices in the smart home become more reliable and easier to install.

Simply put, I can be confident that my lights will turn off, and I won’t have to worry about debugging or just leaving them on due to frustration.

While this is an improvement on the standard concept of the smart home, we can go even further. If we truly want to cut the umbilical cord to the cloud and maximize protection and efficiency in the smart home, we should develop devices that have enough intelligence to process and action data themselves.

This model would base all of the intelligence required for the smart home within its walls. I should be able to talk directly to my lights, with the sensors and processor within, capable of actioning my commands independently.

In comparison to models one and two, the security and privacy of smart home data is far superior here. By removing the need for external communication, the devices involved would possess greater privacy by design, bypassing exposure to cyberattacks from almost all outside sources.

Beyond that, it also allows us to focus on the performance and intelligence of devices in and of themselves. While consumers undoubtedly care about privacy and energy, their foremost priority will always be utility.

That means that the next generation of smart devices has to be easy to install and both reliable and intuitive to use. If a device doesn’t possess these qualities, it’s unlikely to enjoy meaningful success.

To succeed, manufacturers need to develop products built upon a foundation of genuine intelligence and independence. Distributed intelligence imbues devices with these qualities almost by design, helping developers to accelerate our journey into an exciting new era.

Mark Lippett, CEO at AI processing wizard XMOS. He joined XMOS in 2008 and held the roles of COO and VP Engineering before taking the helm as CEO. Mark has extensive experience across the electronics industry, with involvement in both blue-chip and start-up companies.