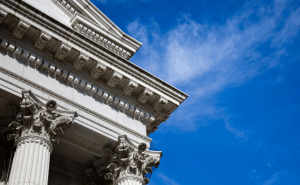 AI stands to revolutionize local, state, and federal operations by facilitating human labor and helping to fill in where humans come up short.

As the public sector works to keep up with AI initiatives taking the private sector by storm, a new picture of government AI is emerging. Artificial intelligence has far-reaching use cases within government infrastructure, planning, and security, and President Trump’s 2019 commitment to making the USA the foremost innovator in AI continues well into 2020.

The deployment of AI throughout federal agencies is helping to streamline and cut costs without sacrificing efficiency. If you thought government and efficiency were two words that never belonged together, artificial intelligence could help change that.

On February 11, 2019, President Trump launched the American Artificial Intelligence Initiative designed to reaffirm and refocus US efforts in the innovation of artificial intelligence-driven solutions. With federal backing and financial support and the partnerships of both public and private partners, the US remains committed to global leadership in AI development.

Federal agencies are tasked with prioritizing funding and investments in AI R&D. The plan is a coordinated effort to unite all government agencies across the board in the innovation and adoption of AI-initiatives.

Explainable systems are a huge priority for government systems because of their trustworthy nature. While much of artificial intelligence is a mystery even to developers, federal agencies have united under explainable AI to mitigate some of this natural distrust.

Where are we heading?

Each department holds a unique role in developing artificial intelligence initiatives. The National Science Foundation, for example, has supported research initiatives that have led to autonomous cars while the Department of Veteran Affairs has invested in health initiatives. As government departments continue to further AI research, their findings trickle down into the private sector.

Part of Trump’s initiative is twofold government solutions. The first is fostering trust in AI applications through research and development. Public acceptance of AI’s full potential is a critical step to total digital transformation, and federal investments are now a top priority.

A second priority and the final part of Trump’s 2019 initiative is government oversight and regulation to ensure that AI development and innovation continues to protect the interest of ordinary people within US borders. These newer regulations should expand AI capabilities while ensuring the technology remains safe.

These technical standards, such as those provided by NIST guidelines will allow government agencies, organizations with ties to government contracts or federal data, and any company looking for greater guidance to develop comprehensive security and governance plans.

The State of Government AI

A recent report submitted to the Administrative Conference of the United States (ACUS) outlines many ways that the government has followed Trump’s initiative and supported AI even before it was signed. It’s bringing the government a level of efficiency, security, and responsiveness that could revolutionize operations.

AI has made some of its biggest inroads in agency enforcement. The government is at the forefront of regulation and developing clear governance strategies as we move forward with this current state of big data.

In fact, this spearheads one of the most significant issues in AI and governance that we face as a nation — the balance between discretion and accountability. Government resources are finite, as are businesses, so the government is leading the way for efficient oversight and accountability.

Organizations such as the SEC are moving this oversight forward instead of addressing issues that have already happened. Although there are heavy technical demands on these systems, Federal investments and partnerships could see greater models with fully integrated systems in a nearer future than we think.

Government is piloting or deploying cutting edge AI tools in a variety of ways:

The most significant way that the government is facilitating AI is by investing in the people required to make it work. Expertise in AI-driven initiatives will help with full implementation. While the private sector often seeks an out of the box model or to partner with third-party experts, government entities are looking to make solutions in-house.

AI-driven initiatives could balance the mythical accuracy/efficiency axis. AI’s algorithmic oversight helps drive data insights, parse text for oversight and a host of other capabilities. AI stands to revolutionize local, state, and federal operations by facilitating human labor and helping to fill in where humans come up short.

AI could bring welcome progress in many aspects of government operation, giving society greater support and making the government more responsive. AI can balance efficiency and accuracy in ways that humans couldn’t dream of. Those same capabilities could help finally make the government known for efficient and decisive action, something we never thought we’d say.