Home / From Our Experts / Virtual Reality, Augmented Reality, and Getting Business Done 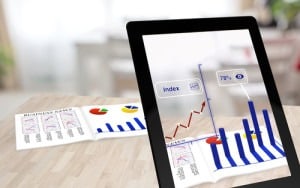 Virtual reality and augmented reality are growing dramatically as entertainment. But they’ll open much bigger opportunities in business.

Over the last few years, there has been a shift in attitude regarding virtual reality (VR) and augmented reality (AR) technologies. In the past, they were generally seen as either science fiction concepts that could never be real or as technology restricted to the world of video games. Nowadays, there is an increasing understanding that they have a practical use beyond storytelling and games. Businesses ranging from health to oil and gas are integrating VR and AR into their work processes.

“Virtual Reality” or VR for short allows the user to view a reality that exists digitally but not physically. The illusion is achieved by wearing a VR “helmet” that projects images and sounds to give the illusion of an alternate reality. Video game companies use this technology to improve consumers’ suspension of disbelief. A gamer can become a soldier, a stuntman, or a surgeon. The technology that allows gamers to enter different worlds is being extended to the real world.

VR games rely on specialized helmets which rely on technologies often independent of the games. There was excitement after the Oculus Rift VR helmet was kickstarted a few years ago because video game companies thought the quality of the tech and games would lead to high consumer sales, but apart from the Playstation VR (which is designed to be used with the Playstation 4), most of the VR headsets have been relatively slow in sales. This is especially true of the smartphone-based VR headsets, which are much cheaper than their heavier brethren but lack applications and mindshare. Although the sale of helmets to consumers has been disappointing, the business world sees great promise in them.

AR by contrast does not create an “alternate” reality but uses a display to augment and overlay information and/or images on the world. AR does not rely on the user wearing a special device to see an illusion. The best known AR-based video game is Pokemon Go, a mobile phone game where people wander around a neighborhood, find monsters to catch, and then use a digital ball to capture the monster that is overlaid on the world right in front of them. In contrast to VR, AR has not been as exploited by entertainment companies as VR. In fact, corporations and the military have been quicker to see its potential in the workforce. For instance, in the early 1980s, the video game company Atari was tasked by the U.S. military to adapt its VR tank simulator arcade game Battlezone for military use.

Safety will be one application

These technologies lend themselves well to improving people’s safety. For example, AR technology keeps workers safe by recognizing when a tool is being misused and projecting instructions for proper tool handling from a user’s point of view. Cars may in the future recognize incoming dangerous obstacles by sending information to the driver via projections and graphics that are highlighted on the obstacle on the windshield. Physicians can use AR technology to be alerted to issues during surgeries.

One of the ways companies are taking advantage of VR and AR tech is by using them for communication. Instead of having people use a computer or a phone to communicate, one can create a virtual environment where people can create avatars to talk to each other. Facebook already has an offering called “Spaces” where users can give avatars facial expressions to facilitate conversation and to make the conversation more real. Video game companies are experimenting with the idea of having players virtually play alongside each other, even when players are strangers and are not physically in the same spot.

One such game is Rec Room, which allows its players to take part in a wide range of activities in a virtual environment. Companies are using this technology to facilitate conferences and meetings. VR allows people in different locations to work on a common product or project. For example, Virtalis advertises that their VR technology allows people in different locations to join virtual rooms where they can observe, manipulate, and edit objects virtually to collaborate on projects. This way, teams can work jointly on projects and see the changes in 3D in real-time. This same technology can be useful to doctors who need to treat patients remotely or who want to collaborate on the development of medical equipment.

Companies see potential in using VR and AR as a way to preview what a project or location will look like once construction is complete. The architecture company AECOM uses the Microsoft HoloLens to add 3D images of buildings on top of maps to get a better understanding of the layout of large projects. Their code allows people to see projected construction over time plus the environmental and social conditions that will surround the project.

Kalloc Studios developed the software known as Fuzor to create virtual locations so potential investors can preview the locations before they pay the construction companies to start work on the new buildings. There are many other applications that one can imagine for this type of technology. For example, VR may allow a customer to walk into a retail furniture store with a virtual model of the type of room they want to furnish and see how the furniture works in that environment.

VR technologies are not limited to building virtual worlds and diagnosing problems; they can also be used to track one’s recovery and treat people. For example, VRHealth is using VR games to help those with health problems assess their physical health by playing games as a form of treatment. These “games” can assess patients’ health and problems through physical challenges. Such diagnostics can be used to track a patient’s health. VR can also be used to train doctors in surgical procedures and practice new technologies without putting a patient at risk.

VR is also being utilized to treat mental health problems such as paranoia and post-traumatic stress disorder (PTSD). Virtually Better sells VR software to treat people with phobias, addictions, and PTSD and provides VR training to health providers. There are firms that use VR to treat chronic pain and dementia. VR and AR are playing a role in treating diseases, and they will help create the next generation of doctors as well.

VR technology is useful for training purposes since they can train many people in different locations at the same time. Shafi Ahmed, the co-founder of Virtual Medics and Medical Realities, used VR to live-stream a cancer surgery in 360 degrees to many doctors at once. This allowed doctors to see exactly what the surgeon was seeing and have the opportunity to look around the room.

VR technology can revolutionize how factory workers are trained. For example, new hires could be given a VR helmet on their first day to receive instructions and virtual practice before performing tasks. This allows people to practice in a controlled environment before working on the factory floor. AR goggles can introduce advanced methods as the worker gets more experienced and overlays instructions and reminders when they are needed.

Maintenance is another opportunity

VR and AR also have great promise in the world of maintenance. VR conferencing technologies such as those built by Virtalis as mentioned above can be used to allow repairmen to get in touch with each other using 360-degree cameras to better troubleshoot a problem. AR technology can provide information as to how to fix a broken part or tool. This is not science fiction. For example, oil and gas companies are already using both VR and AR to help workers better track the status of their energy platforms and their tools. This way, they can use the helmet and goggles to better track the status of all their tools.

The real world will look different as VR becomes more normal and AR augments the world. Realtors already use VR to showcase their houses and will inevitably use AR to display furniture within houses and apartments. Luxury car companies are talking about using VR technology to have people take “virtual” rides within their vehicles; eventually, we may see more bus drivers use AR to highlight changes in traffic.

While the surgeon’s display may not be consumer-ready yet, he is wearing Recon Jet Pro smart glasses you can buy on Amazon right now. The Skylight AR platform already allows AR goggle users to see what other people are seeing. General Electric is using AR technology to help its workers “see” IoT data to help them work more quickly. Altered Carbon may take place centuries into the future, but it is drawing its ideas from existing technology.

VR and AR are still nascent technologies held back by bulk and expense in the case of VR and lack of understanding in the case of AR; over time we will see the two technologies become more common. What we see now are people recognizing the power of VR and AR, and if you think the technologies are exciting now, wait until more people have the chance to see what it can do.