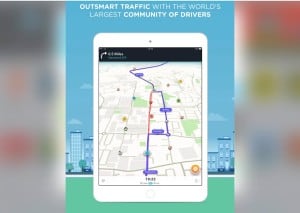 With dynamic ads, Waze generated the app traffic it wanted.

By now, you may have heard of or used Waze, a global, community-based traffic and navigation app that aggregates real-time information from drivers on traffic and road conditions.

Waze is immensely popular, having been downloaded at least 50 million times, according to the most recent available statistics. The app relies on users’ mobile GPS data, providing up-to-the-minute navigation details based on community input. Waze was initially launched by Waze Mobile in 2006, and was acquired by Google in 2013.

As with any app, getting users’ interest and attention is a challenge – especially since the Google Play Store alone has more than one million apps. “It’s tough out there for an app: One in four never even get used after they’re installed,” says Aman Govil, a creative director at Google, in a recently published case study.

The challenge was to reach potential users who have not yet installed the app on their phones or tablets, and enable them to sample the benefits of the app. Not just any users, but “high-quality” users who would consistently engage with the app. Industry figures show that “high-value users engage four times more than the average user and account for, on average, 85 percent of app revenue across retail, sports, communications and music/books categories,” Govil explains.

The Google Waze team set out to employ real-time data feeds to “show users exactly what an app can do, before they even download it,” Govil explains, to see if “a taste of the app’s magic would help acquire the right users from the start.” Also, the program sought to compare results for dynamic real-time advertising, versus standard, static mobile ads.

The Google team began testing the employment of Waze data within these mobile install ads, with the thought that “letting users experience the benefits of an app before the download-and-install process would improve campaign performance,” Govil continues. Typically, most install ads are static, he observes, so a dynamic ad with real-time information had the potential to increase the numbers and quality of new users.

To make this happen, the Google-Waze team embedded real-time traffic updates from the app into mobile display ads, enabling potential users to experience Waze benefits before download, in the moments it would be most useful.

“The Waze campaign began with 10 simple ads — one for each city,” Govil recounts. During the three-month test, the company’s mobile platform served more than 16 million variations of traffic reports. “We created templates that let us A/B test numerous elements including copy, imagery, animation, button styles, and more,” he adds.

Within the three-month testing period, the test ads drove fewer clicks, but those who did click were much more likely to follow through and install the app, Govil reports.

“By sharing Waze’s real-time traffic updates—right in the ads, during the moments when consumers could most use the information—we saw conversion rates soar 865 percent over static creative,” he explains.

There was also a revelation that super-granular reports drove even more interest. “Hyper-local ads that told of a specific traffic incident like, ‘standstill traffic on Portola Drive,’ outperformed ads that were more city-wide, such as ‘717 live traffic reports in San Francisco,’” says Govil. “We learned that even though a user might go nowhere near Portola Drive, the hyper-local ads better showcased the kind of specific, granular information Waze could offer on a city, thus highlighting the app’s unique value.”

In today’s competitive environment, in which app creators increasingly struggle to get noticed and get used on a regular basis, Google’s project showed that well-targeted, real-time advertising can elevate an app’s mindshare.