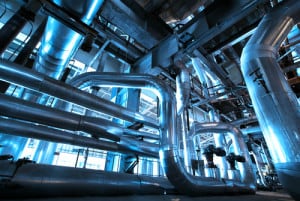 GE’s “digital power plant” employs sensors and real-time analytics across the entire power-production ecosystem, enabling uses such as the optimization of electricity production and predictive maintenance.

Earlier this week General Electric unveiled its Digital Power Plant initiative at its annual Mind + Machines conference in San Francisco. GE’s plan to digitize the electric generation fleet with data collection and predictive software—creating a virtual, “digital twin” of a power plant—makes all the sense in the world.

To start with, GE is a leading manufacturer of gas and wind turbines as well as a major player in the nuclear power sector with Hitachi. Add to that some other facts: Replacing a major piece of equipment such as steam turbine has always been expensive, but extending its useful life is much cheaper. Also, over the past few years, real-time complexity has been growing in electricity markets with the addition of variable energy sources such as wind and solar as well as emissions regulations. That makes the ability respond quickly to real-time, physical conditions on the grid—an attribute known as “flexibility”—a prized attribute.

GE estimates that a Digital Power Plant could produce about $230 million in value for a new combined-cycle gas turbine over its 20 year useful life, or about $50 million for an existing plant. The savings come from data that allows operators to optimize power output—determining when and how it is most profitable to do so—or minimize the need for equipment maintenance. That’s a standard tradeoff in the power industry, as numerous stops and starts wear down turbines more quickly, but GE says its digital solution is unique because it incorporates comprehensive analytics for power production all the way from trading to equipment maintenance.

A white paper accompanying the Digital Power Plant initiative notes that a “typical power plant is a complex system that requires constant optimization across various tradeoffs between availability, output, efficiency, maintainability, wear & tear and flexibility. “ The white paper, written by Marco Annunziata and Ganesh Bell of GE, said if these “tradeoffs are not tackled by using all available data and the right software applications, the plant is operating at a lower efficiency profile, resulting in lower returns on capital investments.” Bell, chief digital officer at GE Water & Power, has noted that a typical power plant has more than 10,000 sensors.

“Once digital tools have determined the machine’s output capability, they can perform an optimization algorithm to provide suggested operating levels to maximize economic value,” the white paper noted. “This may include recommendations on how to bid a plant’s output among various energy or ancillary markets, or at what time a plant should be dispatched.”

GE already has two customers lined up for the Digital Power Plant: Exelon, which has a portfolio of nuclear (the largest fleet in the United States), gas-fired generation, and wind turbines; and New Jersey’s Public Service Enterprise Group, which operates gas-fired plants.

One application that is part of the Digital Power Plant is Watchtower, which will use data to predict asset performance, allow real-time views of a plant’s operational status, and enable proactive notification of plant issues. Another application, Lighthouse, will use advanced analytics to examine historical performance, enhance decision-making, and optimize performance.

Also at Minds + Machines, GE launched Predix.io, a cloud-based platform for industrial analytics and application developers. Customers such as Boeing, Columbia Pipeline Group and BP are already using Predix, and there are already more than 6,000 apps created. GE expects 20,000 developers will be using Predix by next year.

All of GE’s software solutions will be integrated with Predix. These included SmartSignal, which is a predictive maintenance solution as well DenialsIQ, a predictive analytics platform for medical claim denials. IGATE, which was acquired by CapGemini in July, is already using Predix for a real-time data and analytics solution called the “Digital Power Plant Ecosystem” for Woodward valves and actuators. Predix is also being employed in collaboration with Infosys on the Industrial Internet Consortium’s Asset Efficiency Testbed.

During a GE panel on how its software is used in the oil and gas industry, Diego Comina of GE Oil & Gas said the goal was to achieve “zero unplanned downtime” through the use of sensors and predictive analytics. For a liquefied natural gas plant, just a 1 percent increase in productivity equates to $33 million a year, he said.

In addition to the Digital Power Plant and Predix, GE said it plans to create a “new type of energy company” that combines financing with GE’s capabilities across energy efficiency, generation and storage. The new company will target a wide range of commercial, industrial, utility, and municipal customers—including hospitals, universities, retail stores, and cities. GE plans to announce further details in the coming weeks.