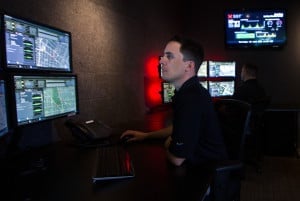 Police departments across the globe are discovering the power of real-time data delivery.

Thanks to new technologies, they have a new set of tools to help prevent and fight crimes in their communities — networks of cameras, sensors and analytics software that not only provide visibility well beyond the eyes and ears of police officers, but also provide real-time insights on the nature of activities being observed. If a pattern of activity, as parsed by an algorithm, shows a high probability of nefarious activity, it is flagged for further observation.

Data makes it all possible – “data is available and often streaming into public safety and government agencies from virtually everywhere — smartphones, social media, sensors, alarms, as well as fixed and wireless video cameras,” explains Mike Fox, writing in PoliceOne. The challenge, he continues, is to “capture, correlate, and share this data in real-time to make it actionable.”

Recently, the Miami Gardens Police Department, which serves 110,000 city residents in Miami Gardens, Florida, leveraged new technology to have eyes on the community on a 24×7 basis. The police department, with support from city government, launched a RTCC. As documented in a case study from CineMassive, the RTCC is equipped with a video wall system costing about $60 million.

To develop and implement the system, the police department turned to CineMassive to design and deliver a turnkey solution – including video walls, a video wall controller, and software. The RTCC, which opened in August 2016, includes two main spaces: a large control room for day-to-day operations and a joint operations center for collaboration with federal agencies. The two rooms are connected by a turnkey CineMassive visualization system featuring four high-resolution video walls and several auxiliary displays.

The main control room includes three LCD video walls that display an arrangement of camera feeds and real-time policing tools, according to the CineMassive case study. There are video screens throughout the police station. The RTCC video walls include configurations of 6×2, 5×2, and 4×2 displays, with smaller 2×2 video wall and two auxiliary displays are mounted above a conference table in an adjacent room. Three additional rooms on the next floor – the police chief’s office, police chief’s conference room, and assistant police chief’s office – are also equipped with auxiliary displays, providing the officials with a real-time view of activity on the video wall system.

As part of the RTCC’s daily operations, officers and analysts monitor video analytics programs, license plate scanners, television news, and ShotSpotter, a real-time gunfire detection solution that maps the location of shots fired in the city. They also use Live Earth, a digital platform that pulls real-time data from emergency calls, surveillance applications, and more into a live, 3D map of the city. By uniting their data sources in a single view, analysts can visualize crime hotspots, identify connections between crimes, and contextualize incidents within larger trends.

The RTCC has given Miami Gardens police and community leaders an advantage in detecting and tracking crimes that may be taking place within the city. The police can now identify crime trends and hotspots, use its resources more effectively, and work faster and safer to intercept criminals, the CineMassive case study states.

“The true benefit of the RTCC is what it will give to the citizens of the community,” says MGPD Sergeant Erik Gleason. “Living in fear isn’t something anyone wants to do, and it’s something our community shouldn’t tolerate. We are looking forward to the RTCC decreasing the amount of fear in our citizens from being victimized.”