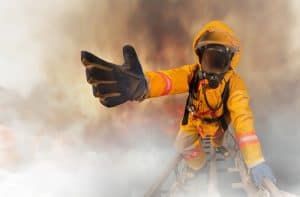 Fighting wildfires has always been a difficult challenge, but real-time technologies may help make things a little easier. New approaches that leverage data, devices and drones are helping firefighters across the spectrum, from forest fires to urban building fires.

The revolution in fighting wildfires as recently explored in a panel discussion at GEOINT 2019, reported by Rob Pegoraro in Trajectory, published by the United States Geospatial Intelligence Foundation (USGIF).

Typically, when a forest fire starts and is reported, incident commanders often are “throwing paper maps across the hood of their vehicle,” says Jeff Johnson, CEO of the Western Fire Chiefs Association. Thanks to technology, this is quickly changing. “This is the time where we bring our ability to analyze data and understand scientifically what’s going on in the environment, and find the technological tools that will bring those to the incident commanders.”

A lack of real-time data often leads to tragedy, as many firefighters have lost their lives due to insufficient information.

Examples of real-time data capabilities include aircraft maintained by the Colorado Division of Fire Prevention and Control “that can be scrambled to collect color and infrared imagery of wildfires and can send data down to firefighters’ mobile devices within 10 minutes.” In another example cited, the California National Guard turned on the capability to shapefile updates of fires to firefighters every 15 minutes.

Aircraft-in the form of drones — can real-time data bring clarity to fighting building fires in more urban settings as well. A post from DJI Enterprise describes how it’s latest drone, outfitted with FLIR heat-sensing technology, serves as a valuable tool for the Decatur, Georgia Fire Department.

The drone flies onsite to “best visualize the scene above the thick smoke.” In this instance, the data coming from the drone not only first detected a house fire, but also helped “to assess the potential of the fire spreading to nearby properties and view the backside of the property to consider the risk to nearby trees.” The drone helped the firefighting team determine if they were making progress, or needed to change tactics.

Technology is now being developed and tested to help firefighters identify what the insides of structures look like as well. Soon, firefighters will be able to quickly access building plans on their mobile devices as they approach a fire scene.

Real-time mobile technology “will give firefighters the ability to show up on scene and be able to pull up blueprints of whatever building they’re about to engage to find out best points of entry,” says Brian Chidester, senior analyst for public sector with OpenText. “It will tell them if there’s hidden hallways or anything like that, providing the best way to get to the fire — saving lives and keeping people safe.”