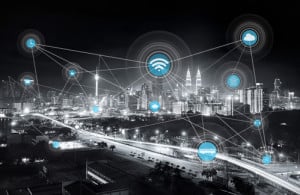 TEPCO and Landis+Gyr are proving that large-scale and fast-moving smart grid deployments are possible.

Japan is well-known for being early adopters of technology of all kinds, and that’s no different when it comes to the Internet of Things (IoT). Tokyo Electric Power (TEPCO) and Landis+Gyr have announced that their collaboration on modernizing Tokyo’s electric grid has now grown to more than 10 million advanced meters and devices.

For the utility industry, the size of this IoT grid is impressive, to say the least. TEPCO and Landis+Gyr are collaborating to install an average of 1 million smart meters and other devices every three months, which means the ultimate goal of 30 million devices in the next seven years is well within reach.

TEPCO is Japan’s largest electric utility company, and the fourth largest in the world. It provides service to 45 million people—roughly one-third of the country’s total population. That area includes the ultra-dense Tokyo, which creates both difficulties and efficiencies for deploying these smart devices.

Right now, the network is moving data at a rate of 513 million interval reads daily, and that’s set to grow to more than 1.3 billion interval data packets daily once the network is complete in the next few years. That equates to quite a challenge, not only in keeping the network active, but also in managing and making insights from the data.

Hiroshi Yamaguchi, an executive vice president at TEPCO, said in a statement: “Our deployment is making smooth progress, and reaching the 10 million endpoints on the network milestone is a clear indication of the efficiency of our program and the capability of our leading-edge system developed by Landis+Gyr.”

The tech behind the smart grid

The impressive interval read and packet numbers are all processed by a meter data management solution from Landis+Gyr. An IPv6 network connects both utility and consumer devices using RF mesh, G3 PLC, and cellular communications. All of the network devices are Wi-SUN compliant, which means that TEPCO could also install devices from a variety of providers and know that they will be interoperable.

The requirements for this implementation are impressive, and difficult to match. In 2016, deregulation of the Japanese electric market required that all meter reads for customers using an alternative meter get pushed to a common portal every 30 minutes so that all energy retailers can get access to real-time data. This equates to a lot of throughput from an incredible number of disparate devices. Landis+Gyr hopes the network will soon hold up to 6.5 million demand response requests per hour.

“The challenges of routing and managing this magnitude of data are real, but we’ve been able to meet deployment objectives and are positioned to complete the project ahead of schedule. Landis+Gyr congratulates TEPCO on reaching this impressive milestone,” says Richard Mora, the CEO of Landis+Gyr.

We’ve been calling for more smart grids for a number of years now—they can offer more big data analytics to the utilities that run them, and can offer several benefits to large electric grids, such as demand response, security, reliability, and prevention of electricity theft. That said, adoption of smart grid and IoT technology in the electric utility space has been slow-moving, particularly in the U.S.

Between 2009 and 2015, Duke Energy rolled out smart grid tests in the Carolinas and areas of Ohio to relative success. In the end, the company was able to deploy 996,000 smart meters, including 630,000 residential meters and 88,000 commercial/industrial meters. The data collected from these meters, which used technology from GarretComm, NovaTech, Beckwith Electric, and SEL, were used to provide customers with real-time energy use data. Self-healing device groups helped reduce service disruptions and the need for monitoring staff.

Those results sound great, but when you look at the numbers, you can see how impressive TEPCO’s effort truly is. Back in 2015, Duke Energy serviced 7.2 million customers in total, compared to TEPCO’s 45 million. And it took roughly six years to install nearly a million IoT devices, when TEPCO is doing that number every three months.

Of course, the geography of TEPCO’s service area works to its benefit—rural North Carolina and Tokyo are just about opposite on the population density spectrum as well. Even then, TEPCO and Landis+Gyr are proving that large-scale and fast-moving smart grid deployments are possible.

Because the implementation is so new, there isn’t much detail about how TEPCO and its customers are benefiting from the new technology. But we’ve seen much smaller implementations achieve impressive results—for example, smart meters with remote start/stop capabilities in Pullman, Wash., eliminated 2,714 service calls in a year and saved the utility $235,000 annually. With a significantly larger deployment, the eventual results for TEPCO are bound to be overwhelmingly positive.

And, with any luck, their numbers will get more electric utilities thinking about how they can make their grids smarter, more secure, and more fault-tolerant with the benefits of IoT.