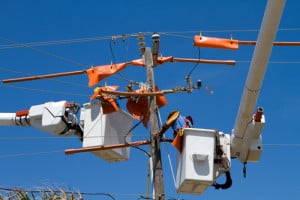 Customers expect around-the-clock access to electricity with no interruptions. But much of the utility infrastructure in the United States is aging, and when the power goes out, it can take crews a long time to locate and fix equipment.

It is also costly to do so. Outages reportedly cost the United States approximately $80 billion every year. Ineffective regulation of voltage on the grid—such as surges, sags, and brownouts—can also be expensive.

Behind the utility meter, another issue is energy theft, which is estimated to cost the U.S. about $6 billion a year.

Duke Energy, which serves 7.2 million customers in the Carolinas, Florida, Ohio, Indiana, and Kentucky, is no stranger to these challenges. As one of the nation’s largest utilities, it owns and operates power plants, transmission lines, and distribution facilities such as poles, wires, and substations.

In 2009 Duke launched a $555 million program to deploy smart grid measures in Ohio and the Carolinas. Approximately $200 million of that came from the U.S. government’s Smart Grid Investment Grant Program. Duke’s investment is part of a $1 billion plan to modernize the grid in Duke service areas through 2017.

For the metering program, Duke deployed 966,000 smart meters in Ohio and the Carolinas, including 630,000 residential meters and 88,000 commercial and industrial meters in Ohio. Duke also created a customer web portal that uses smart meter data—which is available in 15-minute increments—to provide customers with energy use data. Using the web portal, customers can compare their current and 13-month electricity use to an “average” home and an “efficient” one. The smart meters also have remote connect and disconnect functions for residential customers, tamper detection, and outage diagnostics.

In Ohio, there were 30 “self-healing” device groups .By August of 2014, the groups activated 84 times, reducing outage frequency and duration. Three activations alone in 2013 reportedly saved 1.22 million minutes of customer interruptions. “One event maintained service to a large hospital, while another maintained operation to a key substation,” according to the Smart Grid Investment Grant Program. Outrage restoration times also improved.

In Ohio, voltage control achieved a consistent 2 percent reduction in voltage, according to SGIGP. Lowering voltage allows the system to operate more efficiently, reducing the cost of fuel for Duke’s power generation fleet. The remote capabilities of capacitor bank controls, meanwhile, reduced the need for physical inspections by 1,085 units in 2013.

As for the meters, they reportedly reduced meter-reading staff from 135 to 60, and identified 3,325 cases of electricity theft. The meters also resolved 1,393 cases of outages with remote diagnostics and reduced customer calls by 1.4 million.

Work continues. While Duke’s $1.9 billion plan to modernize the grid in Indiana has been denied by regulators, the utility is working with the Smart Grid Interoperability Panel on systems integration and enabling the smart grid to make decisions faster—in less than a minute—which is important for power production from distributed resources such as solar PV. The SGIP work entails collaboration on the OpenFMB project

Frontiers in Artificial Intelligence for the IoT: White Paper
Why the Utility of the Future Is Real-Time
Research from Gartner: Real-Time Analytics with the Internet of Things
Lavastorm: How to Get a Handle on Fast Data
5 Key Considerations for Operational Intelligence