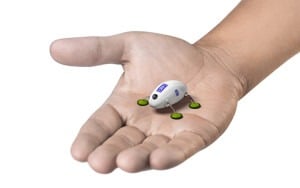 We’re seeing the increased use of robots that are capable of squeezing into tight and dangerous spots inaccessible to humans — such as oil pipelines, radioactive containment chambers, and underground mine shafts.

They are now being employed to manage tasks associated with machine and system maintenance as well.

Rolls-Royce, the aircraft and vehicle engine manufacturer, is now making use of a force of nanobots to service its line of engines. The company describes this new workforce as “SWARM robots,” developed by a Harvard-based team of scientists led by Sébastien de Rivas.

In an interview with CNBC, James Kell, technology specialist at Rolls-Royce, stated these robots “could go off scuttling around reaching all different parts of the combustion chamber.” This is a real time-saver for engineering teams, he added. “If we did it conventionally it would take us five hours; with these little robots, who knows, it might take five minutes.”

“Each robot measures around 10mm (about 3/8″) in diameter which would be deposited in the center of an engine via a ‘snake’ robot and would then perform a visual inspection of hard to reach areas by crawling through the engine,” says Kell. “These robots would carry small cameras that provide a live video feedback to the operator allowing them to complete a rapid visual inspection of the engine without having to remove it from the aircraft.” Rolls Royce is also working with the University of Nottingham on these efforts.

These nanobots promise to reduce the cost of engine maintenance, “increasing the availability of an engine and ensuring any maintenance required is completed as quickly as possible,” according to Rolls-Royce. The company said the nanobots are part of its IntelligentEngine vision, in which products and services have become so closely connected that they are inseparable.

These technologies represent an opportunity to improve the way engine maintenance is delivered, for example “by speeding up inspection processes or by removing the need to take an engine off an aircraft in order to perform maintenance work. This has the potential to offer significant benefits for customers by reducing the cost of engine maintenance, increasing the availability of an engine and ensuring any maintenance required is completed as quickly as possible.”

Rolls-Royce is also deploying what it calls INSPECT robots – “a network of ‘periscopes’ permanently embedded within the engine, enabling it to inspect itself using the periscope cameras to spot and report any maintenance requirements. These pencil-sized robots are thermally protected from the extreme heat generated within an engine and the visual data they create would be used alongside the millions of data points already generated by today’s engines as part of their Engine Health Monitoring systems.”

Another variation being deployed Rolls-Royce is remote boreblending robots that can be remotely controlled by specialist engineers. “In practice, this means that complicated maintenance tasks, such as repairing damaged compressor blades using lasers to grind parts, could be completed by non-expert ‘local’ teams who would simply install the tool in the engine and then hand control of it over to a dedicated expert back (at) Rolls-Royce.”  Another variation is FLARE robots or pairs of ‘snake’ robots which are flexible enough to travel through an engine, like an endoscope, before collaborating to carrying out patch repairs to damaged thermal barrier coatings.