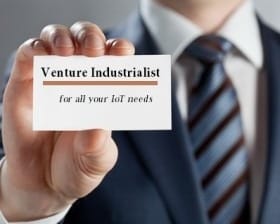 Venture industrialists, which invest in IoT companies, are a bit different than venture capitalists in at least one way: they’re patient.

As the Internet of Things continues to grab attention, it’s also grabbing money. A recent analysis by EY of global M&A activity concludes that third quarter 2015 was another one for the record books, with 1,069 deals sealed worldwide. Technology solutions related to IoT drove this latest spate of activity, the consultancy adds, with IoT-driven deals topping the chart in average value per deal, at about $1.2 billion. Big data analytics – a closely related area — was behind the most lucrative deals.

“Most of the value created by Industrial Internet solutions is additive to what already exists in the economy,” he writes. “A power plant will generate more electricity. A hospital will treat more patients. An airline, reducing delays and cancellations, will transport more passengers.”

While industrial productivity has been anemic in recent years – amounting to about 1.4 percent growth annually – adoption of IoT is about to send things on an upward curve, Annunziata predicts.

“The rapid spread of digital innovation will reboot manufacturing productivity growth through a wide range of efficiency-enhancing solutions,” says Annunziata, predicting that a “new breed of digital-industrial companies will innovate and grow at a much faster speed” than the consumer Internet. Even with just a one-percent jump in the efficiency of connected machines and advanced analytics, “the sheer scale of industrial operations across the globe would translate into substantial aggregate economic gains, valued in hundreds of billions of dollars.”

Not unsurprisingly, the venture capital community is taking notice of this growing phenomenon. In a new white paper, the Industrial Internet Consortium documents this growing wave of investment, drawing on research and perspectives by Judith Kelley, principal at New England Partners.

The expanding Industrial Internet is even creating a new breed of venture capitalist, which Kelley labels “venture industrialist.”

Venture industrialists, on the other hand, are in it for the long haul. These investors and strategists are more likely to be “focused at a stage of thought, creativity and innovation that starts as early as the idea stage,” Kelley relates. “In fact, the idea stage seems to be the ideal place to start.” Plus, VIs may be more inclined to work with existing enterprises as well as startups in the space.

There is a human element to the VIs’ goals as well, Kelley says. Investors and strategists – potential VIs — she interviewed “were more interested in acquiring people than technologies. They were interested in people with experience in specific areas, like data analytics software.”

The Difference Between a VC and a Venture Industrialist

Corporate culture is one of the greatest challenges to VIs, Kelley said. Many industrial companies have been around for a long time, and have deeply ingrained cultures that may be resistant to new approaches. “Some of our VIs said, quite plainly, that arrogance is one of the things that these industrial companies have to fight against. They’ve had so much control over their information and processes for so long, that it’s hard for them to conceive that they may not have all the answers in this new world – or that they have to share control with formerly disconnected siloed groups across their companies.”

The ultimate goal for VIs, Kelley explains, is to gain “operational efficiency that could save their companies tens of millions of dollars.” But it goes beyond simple cost savings. “The companies we spoke to said their focus is the longer term goal of transforming existing businesses or creating an entirely new business. And this is where the need for patience emerges.”

Research from Gartner: Real-Time Analytics with the Internet of Things
Frontiers in Artificial Intelligence for the IoT: White Paper
The Value of Bringing Analytics to the Edge
Data Visualization: How a Futures Exchange Sees Clearly
John Bates, Plat.One: Enterprise IoT Doesn’t Have to Be Hard