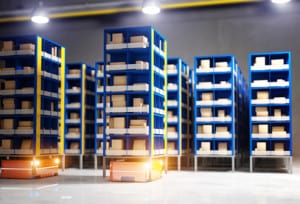 We must begin to reconsider the moral, cultural, and economic implications of warehouse automation.

In any warehouse, there are many processes, including sorting, packing, picking, storage and retrieval. In the majority of warehouses, all of these processes are completed by employees.

However, with the IoT (The Internet of Things) and ever increasing advances in technology, it seems that more and more warehouses are introducing, or already have introduced, robots and artificial intelligence (AI) to automate repetitive tasks.

Automation exists in many warehouses around the world, and is used to describe the use of RPA (Robotic Process Automation) to complete certain warehouse process. It is now being asked, whether in the not-so distant future, robots and AI will replace not just repetitive jobs in the warehouse, but also people whose repetitive jobs they are being tasked with?

There are still many skeptical of the idea of robots automating the array of warehouse processes. The idea that technology can be used to assist human workers with many simple manual tasks is certainly not a new concept. It’s a question of how comprehensive the assistance will be.

A warehouse may choose to automate their packaging process. But even though the original process with human employees took longer, it was more flexible, and minor errors could be easily detected and remedied sooner.

New robotic process automation may prove to be faster and more efficient the majority of the time. However, breakdowns, power outages, and downtime to change the setup for different product profiles all impact efficiency. If these events recur, then the automation is seen as a hindrance.

Warehouse automation has been applauded for halving the work of human workers with repetitive tasks. Although people remain employed by warehouses, and repetitive tasks still remain, robots can be programmed with the ability to handle a specific assortment of products. That means robots and humans share the workload.

Companies that have already made the technological advancement of entering the digital realm of warehousing include Ocado, Amazon and Walmart.

Ocado, the world’s largest online grocery retailer,  is an example of warehouse automation done well. The company uses a 5 Ghz radio control system to manage “autonomous robots moving around above a grid, storing and retrieving crates stacked within the grid,” according to Cambridge Consultants. Ocado can control “1,000 robots from a single base station, communicating with them 10 times a second.”

The company also uses the cloud-based Ocado Smart Platform, which is fulfillment and logistics software platform.

One consideration is how warehouse automation will affect the labor market. What happens when robots are identifying objects and pattern-matching their shapes and attributes with the appropriate picking and packing strategies, and with a higher level of accuracy and efficiency and a lower possibility of reluctance, than a human warehouse employee?

For some, robot labor holds the stigma of uncertainty, and fears of an impending unbalanced workplace dichotomy that favors the robots. We must begin to reconsider the moral, cultural and economic implications of warehouse automation.

Natasha Raymond is the marketing executive for Gideon Hillman Consulting. Her email is [email protected].