With the big data tsunami being generated already, requirements for data centers to meet resiliency, reliability and environmental goals are critical.

The Fourth Industrial Revolution is rapidly gaining momentum – autonomous cars, wearables, drones, smartphones and an endless selection of mobile apps are producing massive amounts of both consumer and enterprise data. According to recent research conducted by global market intelligence firm IDC, worldwide data is projected to reach 163 zettabytes (ZB) by 2025 – 10 times more than the amount produced in 2016.

Given these numbers, it is imperative that data storage centers must meet certain requirements in regards to size, reliability, and security as well as compliance with political and environmental factors.

A Daily Dose of Big Data

The majority of these “big data” zettabytes being created is shifting from the consumer to the enterprise as data is increasingly automated, analyzed, and delivered in real-time. Specifically, worldwide businesses’ portion of data creation will double by 2025: rising from 30 percent to 60 percent.

See also: 5 myths of compliance in cloud and virtualized environments

From the consumer standpoint – by 2025, 75 percent of the population will be interacting with data. The average “connected” person will interact with connected devices nearly 4,800 times per day — that’s equivalent to one interaction every 18 seconds.

Additionally, data is becoming a crucial part of day-to-day life as it is the bloodline of medical devices, cybersecurity platforms, aviation and more use cases. IDC forecasts that 20 percent of data produced in 2025 will belong to data sets that run the risk of being disruptive or even life-threatening, if unavailable at any moment.

Data is becoming increasingly intertwined with businesses, industries, and our everyday lives. Therefore, it is critical that it is managed and stored properly.

Getting Ready for GDPR Regs

The growth of data, coupled with the countdown to new General Data Protection Regulation (GDPR) implementation in 2018, has created a call to action for data centers worldwide. The question is: Where will we store this massive amount of data in a way that is accessible to the end-user and compliant?

Many business executives argue that localizing their data processing capabilities will significantly enhance their ability to abide by the new European laws, provide their services to a market, and sustain their growth. In layman’s terms: companies that offer goods and services within the EU market will have an easier time complying with local regulations.

The first step in achieving full local compliance is selecting a data center solution with physical and organizational security that meets the new requirements. These are set by the American National Standard (ANS) and Telecommunications Industry Association (TIA).

As part of the effects from Brexit, the busines “center” of the EU has shifted to Milan, Paris, and Frankfurt. For example, Northern Italy is an accessible and strategic location for Europe, China and the U.S. companies that want to address European market and, in the meantime, be compliant with EU privacy regulation and reduce the response time of the online services provided. 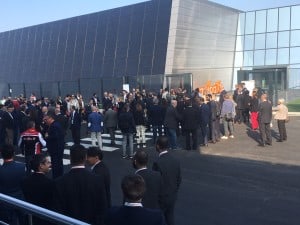 In addition to the meeting the GDPR standards, data center infrastructure must be designed and orchestrated to meet Mother Nature’s standards.

Sustainability is no stranger to the manufacturing sector which continues to innovate alongside technology. Numerous companies are investing in long-term solutions to power their facilities – data centers included. One option is using energy that comes exclusively from certified renewable sources such as the European Guarantee of Origin (GO).

Alternatively, data centers can receive energy via multiple connections to external utilities, such as solar photovoltaic systems, and hydroelectric facilities. Another energy-efficient practice is utilizing a geothermal cooling system that guarantees optimum results with much lower energy consumption.

This is where the ANSI/TIA 942-A come into play – the standard for building a reliable and efficient data center. This rating system reviews various aspects including site location, architecture, security, safety, fire suppression, electrical, mechanical and telecommunication.

The highest levels of resilience to strive for is Rating 4, which means the data center has redundant capacity components, multiple independent distribution paths, allows concurrent maintainability and has protection against almost all physical events.

While the industry races against the GDPR clock and exponential growth of data, it is key that data storage providers have a center large enough to allow companies of all sizes to grow solidly and sustainably over the coming years from a more proximal location.

Stefano is the Chief Marketing Officer of Aruba Cloud. He has over 15 years of experience in the field of ICT, web/digital marketing. He has a degree in science and has always worked in the digital industry.  Early on in his career, Stefano focussed on managing successful startups however moved to managing Aruba, one of the major Italian web companies, in 2012. He has managed various international M&A processes between top players in the world and has gained extensive experience in specific markets including the UK, Spain and, France.