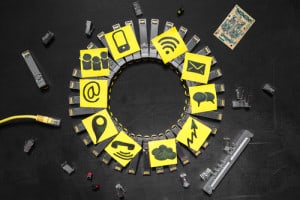 Connectivity for industrial Internet of Things (IIoT) projects has long been a concern. Does one rely on hardwired connections that are fast but cost more and create more points of failure, or does one use one of the many wireless options, from traditional wireless SIMs to LPWA to mesh? It’s not easy for businesses to put all their cards in a single solution for an IoT network, particularly in light of concerns about power use, transmission distances, and security.

A new partnership between GE Digital, Nokia, and Qualcomm Technologies, Inc., hopes to solve these issues with a new private LTE network for IIoT. This new platform combines technologies from all three providers to create a standalone LTE network option that could serve both devices and users in industrial settings, particularly in remote locations or at temporary sites.

Qualcomm is providing the wireless technology and device chipsets, while Nokia will provide the base station infrastructure. Nokia is also going to provide its Nokia Digital Automation Cloud service that allows the LTE network to be run on-demand and privately. GE is not supplying any hardware, but is rather integrating the new network into its Predix platform.

Michael Wallace, the senior vice president and general manager of emerging business at Qualcomm Technologies, Inc., said, “With this collaboration, we are providing companies in the Industrial IoT space the ability to leverage the core advantages of LTE including full mobility, high data rates and coverage, predictable latency, quality of service and ease of deployment.”

One advantage of LTE in the IIoT space is that private LTE-based networks can operate in shared, unlicensed, and dedicated-licensed spectrum. This degree of flexibility helps more companies operate the way they need to based on complexities around location and implementation. Right now, this partnership is using LTE-TDD in the U.S., operating on the 3.5 GHz shared spectrum band known as the Citizens Broadband Radio Service.

If companies want to take advantage of the MulteFire LTE deployment—which is the result of a previous Qualcomm and Nokia partnership—they will also be able to use unlicensed spectrum bands for their private LTE networks. This means taking advantage of the 5 GHz band that’s available globally.

Wireless IoT deployments—whether based on LTE or another technology, like low-power, wide-area (LPWA) wireless—could open up new possibilities for analytics at the edge, whether that’s a remote power transformer or an entire oil rig that’s far from human attention. Companies want to be able to take this information and perform real-time analytics to make better decisions about how to operate their facilities.

With the new prevalence of IoT devices using cellular connectivity, some worry about overloaded mobile connections. A private LTE network would mitigate these concerns, but it’s still important to raise concerns about throughput and potential spectrum overcrowding no matter the connectivity solution.

Other concerns with wireless IIoT tend to revolve around power delivery—if a company takes advantage of wireless connectivity for communication, does it make sense to still rely on wired power? Some argue if a company is going to wire power to every IoT device, they might as well hardwire connectivity as well. If there’s no wired power, electricity use becomes critical, as a battery will only last for so long, even if recharged with a small solar panel.

Going private on an IoT network

Aforementioned security concerns aside, it’s certainly possible for companies to use existing LTE networks for their IoT connectivity, but as with all devices exposed to the wider internet, there’s inherent security risks. A private LTE network enables the same capability while also delivering more options.

According to the partnership, these private LTE networks will give companies the ability to customize the network to accommodate specific needs, such as “optimizing for capacity, quality-of-service, or guaranteed latencies.” On top of that, companies can manage their own network and have a “strong roadmap to 5G.”

Of course, any roadmap to a wireless IIoT implementation that’s even halfway standardized across various industries is going to be laden with hiccups, diversions, and lots of companies opting to do things their way rather than implementing open standards. Even then, there’s optimism to be found in more industry partnerships that aim to simplify and solidify the inevitable wireless future of IIoT. Perhaps the future will involve less connectivity headaches for enterprise IoT deployments.