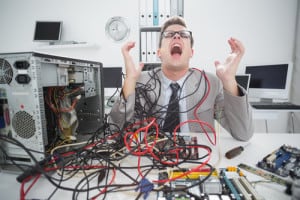 “IoT interoperability will be the ultimate ‘herding cats’ problem.”

Here’s an interesting read from programableweb.com. “There are a lot of numbers flying around about the Internet of Things. Gartner has IoT hitting 25 billion devices hitting $263 billion by 2020. Cisco sees it hitting $19 trillion by 2025 with an impact ten times the Internet itself, which is at least one of the ten most important inventions of our species.”

At the core of this problem is resources. IoT providers, such as those creating sensors, MRIs, drones, etc., just don’t have the resources to promote an open API, or to find one that fits into their world, or their device.

Of course there is the greed angle as well. Many devices focus on proprietary technology and interfaces because they view themselves as the only game in town, and thus they themselves will set the standards.

Issues that arise around the lack of interoperability with IoT-enabled devices include:

You think those issues would be motivation enough to move to an open API, and work and play well with the other IoT providers. Thus far, it’s only gotten worse as more and more IoT devices flood the market. Interoperability will be the challenge of IoT moving forward.

IoT interoperability will be the ultimate ‘herding cats’ problem. If the public cloud market is any indication, APIs will continue to be incompatible. And, like cloud, IoT devices will have to be managed using a common API management layer that can abstract the differences and complexity of the underlying proprietary APIs from the devices users.

However, the use of abstraction layers can only be as good as the underlying APIs, in terms of common patterns that can be abstracted. While public clouds all do storage, compute, network, and so forth., devices pretty much do their own things, and thus the APIs do as well. The complexity is the largest challenge to this entire situation.

IoT interoperability must be figured out. After all, if we have hundreds of devices in our homes, cars, and where we work, it will be too cumbersome to manage those devices individually, each using different and proprietary interfaces. I would say this is the biggest problem that needs to be solved with IoT, and it’s a problem that will promote or limit the future of this technology.