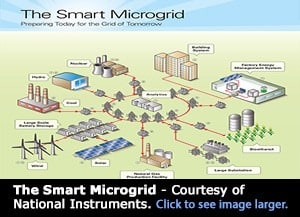 The smart grid changes the way energy is generated and consumed, and is becoming a disruptive force to the electric utility industry. For close to a century, utilities have functioned as centralized, vertically stacked power managers, converting raw materials such as coal or rushing water into power, transmitting it across networks, then billing accordingly.

In recent years, this structure has loosened up (with the generation and transmission sides of the industry separated) to encourage greater competition. However, still missing from the equation is a way to capture and accurately measure the multitude of alternative energy sources coming on the scene.

Today’s power grid relies on a central-station architecture not designed to interconnect distributed and renewable power sources such as rooftop solar and wind turbines. The system must over-generate power to compensate for rapid variation in power generation or demands. As a result, much of the benefit of renewable energy sources in neighborhoods or businesses is lost. Efficiently integrating variable and distributed generation requires architectural innovation.

The project seeks to develop and promote smart microgrids within both commercial and residential settings according to Stan Schneider, CEO of Real-Time Innovations, and an IIC Steering Committee member. “The real driving need is to efficiently incorporate solar and wind energy into the grid,” Schneider said. “It’s disturbingly inefficient today.”

Schneider calls the current electricity network the “stupid grid,” noting that it is designed to flow energy only one way: from large centralized generators to distributed consumers. “That’s just not the architecture of the future,” he said. Instead, he says the smart microgrid combines generation, load and storage, and brings these pieces into a “smart, coordinated system.”

With the rise of micro grids, “the power industry will face disruption on many fronts,” Schneider said. For example, he said making solar and local generation more efficient “will certainly make it more attractive.”

While he doesn’t foresee a wholesale upending of the utility industry, he said the main disruption is to the vendors in the transmission and distribution side of the industry. “Some important business impacts will be optimizing distributed energy resources; this will increase the opportunity for many sources, from solar to wind to cogeneration, as well as local storage like batteries – think Tesla,” Schneider said.

In fact, he continues, the main business effect is to “accelerate the mostly new market for alternative power and storage vendors. New entrants – like our cohorts on the test bed, National Instruments and Cisco – could very significantly disrupt vendors of substation, transmission and distribution equipment. Current equipment is, by comparison, very expensive and stuck with antiquated standards. Any vendor that doesn’t adapt to the new industrial Internet of Things technologies will be passed over.”

Introducing the Flexibility of Real-Time Analytics and Control

The goal of the IIC’s Communication and Control Testbed is to introduce the flexibility of real-time analytics and control to increase efficiencies in this legacy process, ensuring that power is generated more accurately and reliably to match demand. This testbed proposes re-architecting electric power grids to include a series of distributed micro grids which will control smaller areas of demand, with distributed generation and storage capacity. These micro grids will operate independently from the main electric power grid but will still interact and be coordinated with the existing infrastructure.

Ultimately, micro grids will extend beyond the electric utility industry, according to Schneider. What may be an adjacent industry that could benefit from the technology? “In our humble opinion, the entire industrial infrastructure of the planet is an adjacent industry,” Schneider said. “The exciting potential is to develop a common architecture that can bridge sensor to cloud, interoperate between vendors, and span industries. That would create a true Internet of connected systems that can fundamentally impact daily life and drive economic potential.”