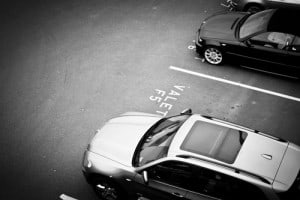 Los Angeles has a well-earned reputation as a 503-square-mile parking lot surrounded by mountains and ocean. Of course, the problem isn’t the parking lots themselves —it’s finding available parking as you pull off freeways and boulevards.

The difficulty in finding open parking around the city and its nearby suburbs isn’t just a matter of inconvenience for drivers. It also means increased gasoline use and added pollution spewed into the atmosphere as vehicles are driven around in circles in search of open spots. If these long searches for parking spaces could be avoided, it could make a major dent in gasoline use, avoid large amounts of pollution, boost economic activity, and leave visitors with a somewhat warmer and fuzzier feeling about the city.

City planners decided that a smart-parking approach—employing real-time messaging tied to mobile technologies—could help alleviate some of this pain. Thus was the beginning of the Los Angeles’ Express Park system, launched in May 2012.

The real-time parking system collects data from wireless sensors positioned in 6,300 public parking spaces in the downtown area of the city. The data is then run through an algorithm-based supply-and-demand pricing model, providing real-time information on available spots to drivers using mobile apps called Parker, ParkMe and ParkMobile. The sensors are located along curbs, as well as in city parking lots. Drivers then make payments to smart meters or nearby pay stations.

Using a demand-based pricing strategy, meter rates increase when and where demand is highest while maintaining lower hourly rates in areas with less demand. The Los Angeles Department of Transportation is using information provided by in-ground vehicle detection sensors, along with rate, time limit and operating hour information from smart parking meters, to analyze demand for parking and adjust rates as appropriate. Any rate increase in the program area, however, “shall be reasonable,” according to LA Express Park.

The City of Los Angeles turned to several third-party technology solutions providers to manage the real-time parking program, which requires handling Big Data as well as keeping applications up at all times. Ascendum and CenterGrid capture, manage and analyze the wireless sensor data. Front-safe was also brought in to assure the security of the data. “Smart parking is a classic Internet of Things problem,” said Uday Kumar, vice president of Ascendum USA, in a presentation at the recent IBM Edge conference. “For those who live in LA, or New York, I’m sure you measure distance in time, not miles.”

Constant, uninterrupted application uptime is critical to enable drivers to make split-second decisions on securing parking spots as they open and close, said Tim Campbell, CEO of CenterGrid. “That application has to run. The infrastructure matters. It matters what this stuff is running on. Because it has to be there all the time …  99.999 percent availability doesn’t make sense—it has to be 100 percent. For this application to be down for 35 minutes at 8:30 in the morning for the city of Los Angeles is a disaster.”

The demand-driven smart parking initiative is expected to help ease Los Angeles’ persistent smog problems. “It’s a great initiative to reduce emission footprint, because it’s been seen that 30% of the traffic downtown is driving an hour to look for parking,” says Kumar.

LA Express Parking is part of the Los Angeles Congestion Reduction Demonstration, started as a one-year pilot program created with $15 million grant from the U.S. Department of Transportation and $3.5 million in city funds. The results of the program are still being measured –Express Park officials note that “while a more comprehensive evaluation of the program is being performed by a consultant, results have thus far shown improvements in the utilization of parking resources downtown.”

Along with reductions in energy use, pollution, and driver frustration, the city gains an another important benefit: data. Essentially, smart parking is “the way the city gets access to data in real time to actually plan for peaks and valleys of [the] commute,” says Uday Kumar, vice president of Ascendum USA.