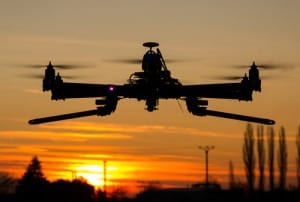 We all know that robots are taking on starring roles in factories and other industrial settings — in fact, the sight of robotic arms applying parts on assembly lines has been a familiar one for decades. Now,a new twist — robotic drones are taking on the work of surveying sites from a high-level perspective, helping to quickly spot problems long before human operators are aware — while also meeting environmental regulatory requirements.

In a presentation and paper presented at the recent IEEE Edge Computing conference, a team of researchers led by Roberto Silva Filho of the General Electric Global Research Center (GE-GRC) demonstrated how robot drones have played a role in remote methane inspection in an oilfield, helping to catch serious problems before they become problems.

See also: What’s up with IoT and drones?

They describe a robotic platform, called Raven, developed within Baker Hughes and GE-GRC, which supports the interaction among semi-autonomous robots, human supervisors, model-based edge controls, and cloud services. Raven employs drones to help automate the field data collection and detection of methane leaks in oil and gas facilities, Filho and his team explain.

These drones automate “the otherwise labor-intensive task currently performed by human inspectors that need to manually inspect facilities and pipelines using optical gas imaging (OGI) devices. This method is time-intensive and the data provided by the measurement device is qualitative in nature. i.e. it only provides a binary (yes/no) indication of leakage with no measurement of its intensity. Additionally, the OGI devices are expensive and difficult for operators to deploy at-scale.”

The team outlines the six steps that deliver real-time drone data to operators:

The geolocated heat map is produced from the drone, employing a laser-based methane sensor pairs methane concentration values with the GPS coordinates. “The operator at the ground-level is able to quickly identify where potential leaks may be,” the team explains. The platform also delivers a live video feed that points the inspector “to the exact location of the UAV, so the concentration hot spots are easily identifiable. In addition, Filho and his co-authors add, “during post-flight processing, the collected imagery is converted into a new/updated 2D image of the facility,” allowing for greater accuracy.