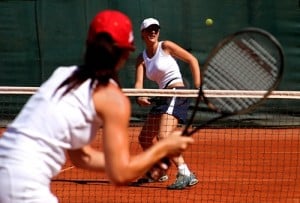 Professional tennis is a game of geometry and percentages. It’s the closest thing the sports world has to chess in motion, with players planning ball placement several shots in advance and reacting in the blink of an eye.  As a match progresses, geospatial patterns and statistics surface. A slight increase in unforced errors or in first-serve success, the exploitation of an opponent’s weak side, being drawn too often to one side of the court–any of these can mean the difference between a win or loss.

In the world of sports analytics, the Moneyball phenomenon in baseball is well known. In American football, analytics are used as a means of preventing injury and this season RFID tags will be able to chart every player’s movement on the field in real time. Tennis, however, has been slow to adopt real-time analytics, with tennis coaches usually just watching the action in the stands and advising the player during breaks. Now a data analytics platform offered by SAP offers a portfolio of real-time and archived analysis.

The software, SAP HANA, gets data from the Hawk-Eye line-control system on professional tennis courts that determines shot placement and which players use to challenge umpire line calls. (We’ve previously covered the SAP HANA platform for real-time analytics in the business world here). For tennis, SAP developed the software exclusively for the Women’s Tennis Association, and coaches can use tablets to access a variety of data, including: 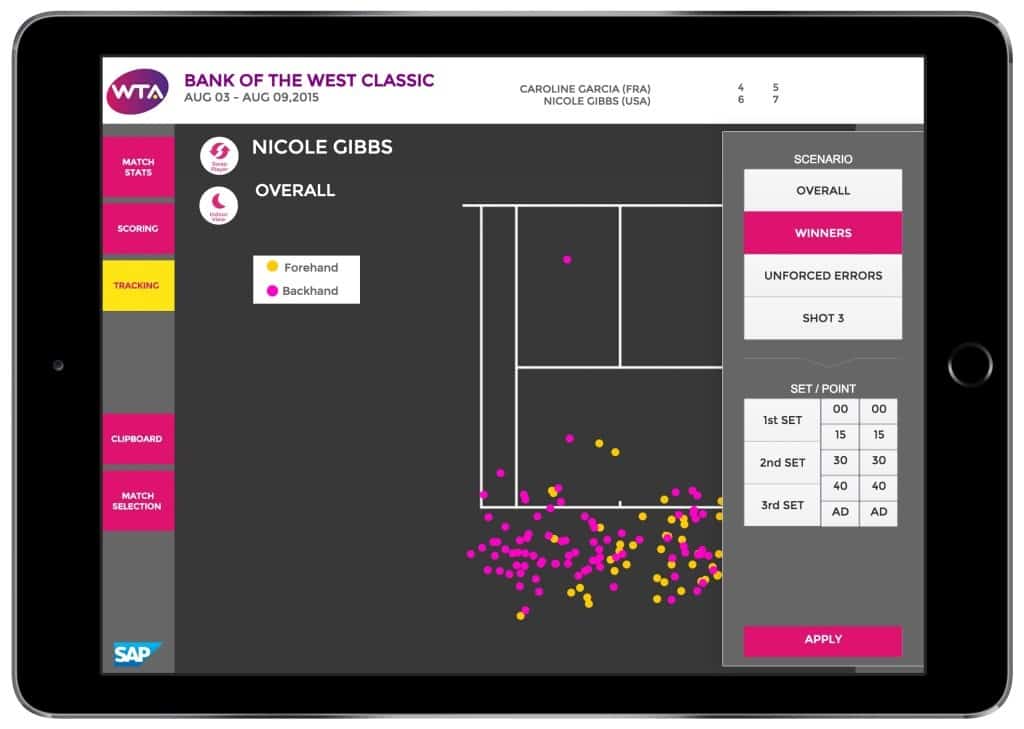 The SAP HANA tennis analytics platform, on an iPad.

“Getting context around those key stats helps coaches understand the strength and weaknesses of an individual player but also of the opponent,” said Jenni Lewis, solutions architect and sponsorship technology lead for SAP Global Marketing. Coaches can take the tablet on the court and show a player exactly what shot patterns look like. “We can show them exactly what is happening throughout that particular match.”

The software was initially developed last October but underwent updates after input from the WTA. Those updates include filters and pre-defined scenarios so that players can drill into the data at various levels—for example, by set, game score, winners, errors, unreturned serves, and so forth. An archive mode allows the users to review completed match data within the same tournament. SAP HANA also cleans up data to present users with only relevant information, and data is stored in a cloud.

The analytics platform initially debuted at the Bank of the West Classic, a women’s tennis event held in Palo Alto, Calif., in August. According to the WTA, during the event, coach Torben Beltz used the SAP system to advise her player, Angelique Kerber, that her opponent was serving to her backhand side nearly every time. Kerber eventually won the tournament. SAP added that the software is used by top coaches such as Nicole Pratt.

Lewis also stressed that the software can let players know how a season is progressing. Coaches have information before, during, and after a match, and “that is where this information starts to have some real context.” Coaches can show players how they played in a match but reference a prior match where they adapted to a similar circumstance. “It’s important to tell a full season story not just a match-by-match report,” she said.

Coaches will have the opportunity to use SAP Tennis Analytics at additional WTA events in 2015, including the Wuhan Open, Prudential Hong Kong Tennis Open, and the BNP Paribas WTA Finals Singapore.

Putting IoT Safety First
Mining for Gold from Real-Time Traffic Control
Frontiers in Artificial Intelligence for the IoT: White Paper
Research from Gartner: Real-Time Analytics with the Internet of Things