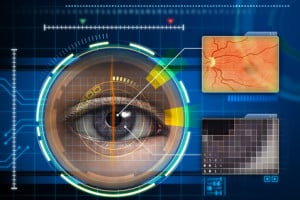 When we talk about artificial intelligence here at RTInsights, we typically cover topics like recommendation engines, such as selling houses on Trulia, or implementing some kind of predictive analysis to make CRM or marketing more effective.

But artificial intelligence can be used for actually improving the lives of ordinary people—according to a new study conducted by researchers from the Byers Eye Institute at Stanford University, AI could soon be used to fight vision loss due to a complication that stems from diabetes.

Diabetic retinopathy (DR) affects the blood vessels at the back of the eye while a patient has diabetes, and it’s known to cause preventable blindness. The researchers are using AI and other deep learning methods to create an algorithm that’s capable of detecting DR with an accuracy rate of 94 percent. That number applies to all the disease stages—mild to severe—so it’s not only beneficial to those who are dealing with severe vision issues due to DR. Those in the earliest stages, when treatment can be successful at preventing vision loss, could then seek out the right specialist to mitigate any further damage.

An algorithm for diabetic retinopathy screening

Theodore Leng, M.D., the lead author of the report, says that this algorithm is actually quite accessible—it can be run on an ordinary personal computer, or even a smartphone, with a current average-grade processor. In order to develop the algorithm, the team used a training network of 75,000 images from patients across a range of ethnicities, to ensure the algorithm was universal. These images were then used to differentiate between a healthy patient and those with any stage of the disease.

Why use AI for the detection of DR? Diabetes affects in every 11 adults worldwide, and 45 percent of those will have some level of DR in their lifetime. Simply put, that’s a lot of people, and DR is currently diagnosed by first examining the eye and then evaluating color photographs. It’s a time-consuming process, even for specialists. According to Dr. Leng, doctors in areas with fewer resources are disproportionate affected, and have the most to gain from any boost in diagnostic ability.

According to Dr. Leng, fewer than half of diabetic patients are aware about how DR might be affecting them. If the algorithm could be used to detect even a portion of those patients, it could make significant inroads in helping stop preventative blindness around the world. Pilot trials will hopefully be started in the near future, followed by approval from the FDA.

Dr. Leng says, “If properly implemented on a worldwide basis, this algorithm has the potential to reduce the workload on doctors and increase the efficiency of limited healthcare resources. We hope that this technology will have the greatest impact in parts of the world where ophthalmologists are in short supply.”

We’ve seen this trend before, with overworked radiologists who could benefit from an algorithm capable of making their work more manageable and accurate. It’s not about outsourcing or replacing a doctor’s expertise on diagnosis, but rather giving them more tools to work from.

Researchers at Harvard Medical School have also recently been hard at work on an algorithm that can detect breast cancer with 92 percent accuracy. When paired with a trained human pathologist, the accuracy of detection rose to 99.5 percent—an impressive figure that will likely save lives when rolled out widely.

Aside from analysis of diagnostic imagery, AI is being used in hospitals, along with IoT and other connectivity technology, to help seal up communication gaps and ensure that every doctor on a particular patent’s team is fully up-to-date on the latest progress. Even the devices used in day-to-day hospital workflows are being upgraded with networking capabilities and smart design. The AdhereTech pill bottle detects when the bottle is open, transmits information to the patient’s doctor, and reminds patients to take the medication. The company claims a 20 percent boost in medication adherence.

That’s a big number, but even small percentages make a big impact when it comes to people’s health. If Dr. Leng’s new algorithm only improves DR detection by a single percentage point, that could still affect millions of people. And when it comes to ending preventable blindness, every correct diagnosis counts.