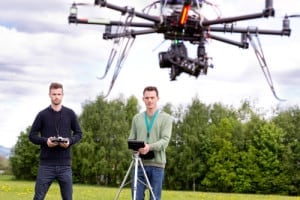 “We’re from the government and we’re here to help.”

The FAA commenced online drone registration on December 21. Why? Public issues around the use of these multi-rotor flying machines, along with fears of terrorism, drive much of the regulation. The U.S. Federal Aviation Administration disclosed that its drone registration website went down “for a while” during Day One of the new regulation. Over 45,000 registrations were completed throughout the first two days of the law’s implementation.

The FAA wants every drone to be registered if it weighs from 0.55 pounds to 55 pounds, which includes payloads such as cameras. So, what if you don’t register? Those who do not register face up to a $27,500 fine. They can also be imprisoned for three years as a penalty. Wow! For flying a toy?

What bothers me is that drones are now defined as any model aircraft, of which I own dozens. This includes model airplanes or helicopters that I built over 10 years ago and have flown at my local model airplane club field over the years, not over people’s heads or near buildings. What the government really wants to control are drones that are pre-built devices and which go from box to the sky in about 30 minutes, not hobby drones flying at model airplane club fields. However, they are including anything remotely ‘drone’ in this regulation.

Since its initial announcement in October, the drone registration plan was peppered with unanswered questions about enforcement and practicality. Some aviation attorneys are arguing that the entire registration process stands on faulty legal grounds. The Academy of Model Aeronautics (AMA), of which I’m a member, asked me to hold off registering my models until the regulation is better understood, and perhaps until after the court battles.

Of course, when you think about drones, you think about IoT. Drones are a large part of IoT solutions, including monitoring crops, weather monitoring and analysis, and even security and anti-terrorism. I suspect those drones should be registered, since they are engaged in commercial activities. However, those folks who fly drones around their own homes, or fly traditional model aircraft at fields set aside for that purpose, should be left alone.

The end result is that we’re labeling drones as modern-day firearms, and thus they must be registered. I’m sure we’re headed toward background checks and mandatory training at some point, since I don’t think that registering drones will hinder all of the silliness, nor will background checks or training. And registration won’t keep drones out of the hands of the bad guys, so let’s stop that fantasy right now. It will also hinder some of the IoT uses of drones, which are just gaining momentum right now. I guess the old saying “We’re from the government and we’re here to help” is now part of the IoT world as well.

Research from Gartner: Real-Time Analytics with the Internet of Things
Getting Fast Results from Slow Data
Goodbye Don Draper, Hello Big Data: An EMA Report on Modern Analytics
Why Edge Computing Is Here to Stay: Five Use Cases
What’s Behind the Attraction to Apache Spark
Video — Plat.One CEO: Enterprise IoT Doesn’t Have to Be Hard