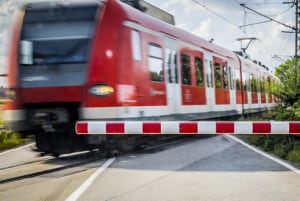 For railroads, having visibility across a national network of tracks—140,000 miles to be exact— and thousands of tons of rolling stock delivering 5 million tons of goods a day is a challenge. Parts break down, rails may misalign, and one railroad derailment or accident in the system will back up the entire national network.

Along with complications with freight delivery, many tracks are shared with passenger lines, which also introduce additional management challenges. In this age of social media, rail passengers can be demanding and vocal, says Keith Dierkx, IBM’s global industry leader for railroads. “One rail CEO said to me, there are 30 million rail CEOs on his trains every day. And by that he meant that everyone taking his train was blogging, tweeting, or posting on Facebook and other social media. So we’re starting to see a lot more conversations taking place between railroads and passengers.”

For Union Pacific, maintaining a nationwide network of freight lines requires a great deal of visibility and coordination. For railroad data, the key is gaining real-time visibility across a national network of tracks and trains that are quickly disrupted when incidents or slowdowns do occur. Predictive analytics, streaming into the railroad’s Omaha, Nebraska-based control center, can make all the difference.

“UP would like to be able to predict when a wheel is going to fail weeks before it causes a 1.5-mile-long, 20,000-ton coal train running at 70 miles per hour to derail, risking lives, causing delays, and losing the company money,” writes Chris Murphy in InformationWeek.

“If the temperature spikes, the rail expands, and all of a sudden, they’re dealing with kinks in the rail. If the temperature contacts, the rail contracts, and as a result, the company faces broken rails,” writes Brian Watson in HP Matter. “Two years ago, a drought in Texas dried the earth so suddenly that the roadbed became unstable and required more frequent inspections. Historically, the company combatted these threats via manual inspection and inspection cars that run sonar through the rails, looking for any potential damage. Both methods pose problems, whether in capacity or efficiency.”

The Internet of Things is a natural use case for railroads, which actually have been using RFID (radio frequency identification) technology to track rail cars since 1991, says Dierkx. However, many freight cars lack electric power, so the railroad needs to employ trackside sensors for information on the condition of cars and tracks.

To get better railroad data, Union Pacific deployed infrared sensors and microphones at 20-mile intervals along the lines to provide real-time information on the conditions of its equipment. “When a railcar comes by, it rolls over the sensor, which inspects the bearings for temperature patterns, according to HP Matter. “If something is amiss, the sensor communicates the issue to the train crew, who are then responsible for inspecting the bearing with their own infrared tools.” In addition, the sensor data is transmitted back to the railroad’s Omaha control center, where a variety of pattern-matching algorithms provide predictive insights on whether a part is going to fail.

With this railroad data in hand, Union Pacific’s administrators are able to “decide within five minutes of taking a reading whether a driver should pull a train off the track for inspection, or perhaps just slow it from 70 to 35 mph until it can be repaired at the next station,” according to InformationWeek.

The sensors “are able to pick up measurements such heat, acoustics signatures and wheel impact and know whether that rail car is traveling safely,” Dierkx says. With trackside microphones, the railroad’s systems can analyze the sounds a passing train is making and “determine if a wheel or axle or bearing is operating within certain parameters or needs to be inspected. If it detects an abnormality, the system sounds an alarm.” Railroads are also planning to tie sensor data into “Positive Train Control,” in which trains can be automatically slowed or stopped for safety reasons.

As a result of this investment in sensor technology and analytic algorithms, UP has been able to reduce derailments by 80 percent, HP Matter reports. In addition, Lynden Tennison, CIO of UP, has decided to share this code with the rest of the industry to help reduce derailments across the board.

Tennison and his team also plan to begin putting sensors onboard locomotives to measure various performance thresholds. UP is also looking at installing video cameras inside trains and along its tracks for additional information. After that, he envisions installing video cameras and other sensors in other rail cars and on bridges, further ensuring safety. “The hope is to get more readings on temperature, vibration, pressure, and other measures to drive safety first, but also productivity and efficiency, and ultimately better asset utilization,” HP Matter reports.

Frontiers in Artificial Intelligence for the IoT: White Paper
Preventive Policing: Using Gunfire Detection to Fight Crime
Research from Gartner: Real-Time Analytics with the Internet of Things
Real-Time Drones: Coming to an Office Near You
Process Intelligence: More than BI