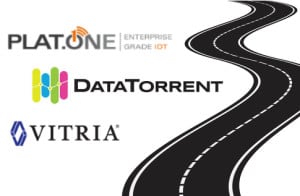 The IoT is a behemoth, with business value found everywhere from smart sensors to cluster-computing frameworks and real-time analytics software. The goal with most IoT projects is to ingest, analyze, and act upon real-time data for business advantage. But that brings up challenges. Can devices communicate with each other? Is there a framework in place to process all the data? What kind of analytics to perform?

We recently sat down with three innovative Internet of Things companies that solve challenges with enterprise IoT applications, including Plat.One, Vitria Technology, and DataTorrent:

Adrian: Hi, I’m Adrian Bowles, founder of Storm Insights and Executive Analyst with RTInsights. We recently took RTInsights on the road for a day of vendor briefings in Palo Alto. We’ll start with Dr. John Bates, CEO of Plat.One

John Bates:  Well, first in the book, Thingalytics. It’s all about smart, big data analytics for the Internet of Things. The Internet of Things, to me, is the new industrial revolution. The reason I wrote the book is a couple of reasons. Number 1 is to actually say there’s all these fantastic stories out there. I’ve been working for a number of years in these areas. You know, intelligent customer experience, connected industry, connected transport and so on, connected medicine, and people may not know what’s actually going on. There is cool stuff going on, so number 1, to tell the stories, the cool stuff.

I’ve just joined this month a company called Plat.One as CEO. Plat.One is all about improving the time to value of creating Internet of Things applications. It’s all about providing a platform to allow you to rapidly connect the devices, manage those devices at an edge which would … before things touch the code, actually, on those routers and gateways at the edge of the network, but also be able to stream information to the cloud, be able to [run] applications. To be able to deliver those things like smart cities, like connected products, like smart medicine, smart industrial applications and so on.

That’s what it was about–it’s about quick time to value, rapidly being able to exploit them together. Because if you built them from scratch, it can take 10, 20 times as long trying to piece everything together. There’s a lot of different machine protocols and complexity of a device in each level, there’s a lot of complexity around the streaming services to get things up and running.

Related: “Why Enterprise IoT Doesn’t Have to Be Hard”

Adrian: Next you’ll hear from Dr. Dale Skeen, a co-founder and CTO of Vitria.

Dale: Around late 2000 … 2007, 2008 … we decided that there was an emerging opportunity we really wanted to focus the company on, so the original founders and some of the original investors came back in. We invested in the company, took it private, and since then has been really focused on real time analytics. That is an area that I am very passionate about, I’m very excited about.

What we’re doing is providing a very high -level extraction. We call it the analytic pipeline. You think in terms have you captured the data, you enrich the data with contextual information, I think what would help there is if you take an example coming off of, for example a smart meter. You want to know, be able to…look at the operational performance of that new concern, about maybe fraud or failure. That data comes in and you want to be able to capture it, you need to enrich it. In this case, if you’re looking at failure, you would want real-time information, because as you know, that’s a big contributor to failures on the grid. You enrich that data, and then you do analytics, like KPIs, like you look at voltage sags, up and down for that. That provides a certain sort of value. But then you can extend that with the notion of advanced analytics.

What I’d like to do is, looking as voltage signatures over time, do I predict a failure or problem with that? You can come and introduce predictive models now. Predictive failures and predictive maintenance is probably one of the largest use cases for real time information. Then the next step is using another type of advanced analytics which is called prescriptive analytics. It’s really our goal to enable people who are focused on the business itself, not only the things, the Internet of Things that they are trying to measure, to really enable them to do this. This is what we’re bringing to the table, on top of these more basic frameworks that are provided.

Adrian: Finally, a few words from John Fanelli, the VP of Marketing at DataTorrent.

John: DataTorrent as a company has been around since May of 2012. We are founded by a couple of ex-Yahoo veterans, many of the big data firms that you might see. Our CEO has an interesting background. His name is Phu Hoang, and Phu was [one of the first] engineers at Yahoo. He was there about 12 years, he built up a team of about 3,000 engineers, [for] all the consumer-facing sites, but Phu actually kicked off a project when he was heading up search, and that project ultimately became known as Hadoop. He brought in Doug Cutting, paired him off with a guy named Eric Baldeschwieler and that’s kind of where Hadoop evolved from.

The whole premise around DataTorrent is really to allow organizations to look at fast data, so data that’s coming in, you know multiple sources, sensors, websites, transactions, click streams, all those types of data. To look at that data in real time, the ability to ingest millions of these events per second and literally process billions of these events per second. Fully distributed across Hadoop with the business value being that you can arrive at your insights more rapidly and then actually automate the actions that you take as a result of those insights. By doing that, you actually receive greater value from your big data.

At its core, you can almost in many regards, think of our product platform as kind of a Java [app] for big data. You create a streaming application that’s a data flow. That allows us to do some really interesting things without requiring the developers to learn a new language or do something esoteric like MapReduce. By releasing the first two releases of our product as a proprietary product, we are able to really work out the kinks and deliver truly an enterprise great product. I’d like to use this acronym called SHARPS, and SHARPS stands for something that is scalable, highly available, reliable, performant, and secure. As a platform, you need to be SHARPS, and as a product offering, you need to be easily used. You need to satisfy the enterprise needs. As we talked about with DataTorrent, with the visual tools that we provided, we’re delivering that ease of use component. We open source the core SHARPS platform, and the uptake in there has been fantastic.

Adrian: Thanks for watching. We’ll be posting additional videos from this trip and more on RTInsights.com.

Related: “Why Enterprises Struggle With Apache Storm and Spark”

White Paper: How to ‘Future-Proof’ a Streaming Analytics Platform
Research from Gartner: Real-Time Analytics with the Internet of Things
E-Book: How to Move to a Fast Data Architecture
The Value of Bringing Analytics to the Edge
Factory Testbed Focuses on Visualization
Video: Loop AI Labs on How Cognitive Computing Understands Language