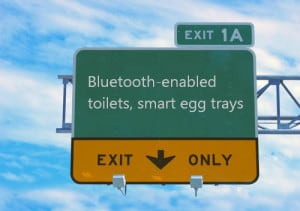 Now that IoT is all the rage, venture capitalists and crowds of innovators have rushed into the space. This has already produced some pretty innovative IoT devices, such as the Nest thermostat and connected cars. However, there has been some pretty dumb stuff as well, such as the now infamous smart egg tray (pictured below), which “syncs with your smartphone to tell you how many eggs you’ve got at home (up to 14) and when they’re going bad.” 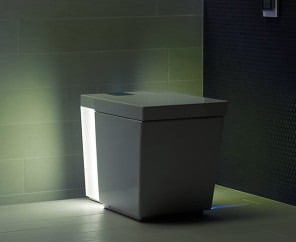 The reality is, just because we can put sensors in things and communicate the data, does not mean we should. Indeed, the list of the ridiculous is getting longer, including WiFi-enabled diapers and Bluetooth-enabled toilets.

There are some criteria that we should use when we decide that it’s a good idea to network-enable everything. It needs to be useful — meaning it solves a clear and existing problem that’s difficult to solve without IoT. Moreover, it needs to be pertinent. I mean, how hard is it to look in your fridge to see how many eggs you have left?

There is an obligation from those who are innovating in this space to put some thought behind what they are doing. If we try to connect to every device, or thing, then IoT will actually make our lives more complex. We’ll be so ill-equipped to deal with information coming from these devices that we’ll quickly become data-saturated.

There’s also is the issue of data sense. IoT is not about embedding sensors in things, and connecting them to the network. It’s about making sense of the gigabytes of data these devices spin off, and automating responses to that data. This includes the ability for jet-engines to report problems well before failure, or a sensor that can pick up an increasing level of CO2 before it becomes critical. In other worlds, this can be life saving stuff, and it should not be taken lightly.

So, my assertion is that we should all consider a specific set of criteria before IoT-enabling anything. This includes asking the following questions:

It’s not much to ask for, but I suspect we’ll see more ridiculousness in the IoT space. The market will normalize as we push back on the things that don’t need to be connected. This will hopefully divert the innovation to different and more productive directions. We need to focus on real problems, guys.