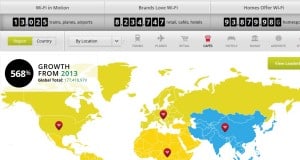 The business model of iPass is built on selling commercial WiFi hotspots to enable global connectivity. The company said it has more than 50 million iPass-enabled hotspots across the globe—in places such as airports, cafes, and trains—allowing employees to stay connected wherever they travel. Users can also access WiFi on airplanes.

Announced in November 2015, iPass SmartConnect uses analytics to gauge the performance and location of Wi-Fi hotspots worldwide, both inside and outside its network. Using predictive analytics, the technology automatically connects users of the global iPass network to the best Wi-Fi hotspot for their usage needs, according to a press release. SmartConnect uses automatic virtual private network tunneling.

The company stated that iPass SmartConnect will enhance the user experience, and provides intelligence to the company’s efforts to add networks and partners.

“We have the world’s largest Wi-Fi network, and now with proprietary analytics from iPass SmartConnect, we can ensure the best user experience by pinpointing weak access points that contribute to a poor user experience, and subsequently eliminate them from our network,” Gary Griffiths, president and CEO of iPass, said in a press release.

On its website, iPass has a real-time ticker for worldwide and roamable WiFi hotspots.

RTInsights Take: The ability of real-time analytics to identify issues with network connectivity, resolve data bottlenecks, or optimize the flow of data is key to many real-time applications, including the Internet of Things. Often these connection issues – whether WiFi, Ethernet, or other communication protocols — must be resolved in seconds. In a variety of use cases, ranging from financial transactions to e-commerce and power production, delays in connecting to a network or transmitting data can not only mean lost revenue, but can derail an entire business model.

Related: Why the IoT is only as good as its connection

White Paper: How to ‘Future-Proof’ a Streaming Analytics Platform
Research from Gartner: Real-Time Analytics with the Internet of Things
E-Book: How to Move to a Fast Data Architecture
The Value of Bringing Analytics to the Edge
What’s Your Business Intelligence System? How About Your Culture
Video: Rocana Rolls Out 1TB of Free IT Monitoring