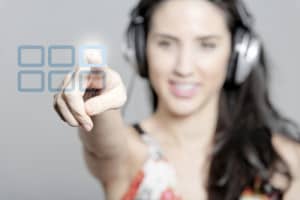 Musimap graphs titles with 55 weighted variables to each music unit.

Thanks to digital, music is getting highly personal. Unlike a decade or so ago, no top-10 lists are alike and are likely to incorporate elements from many different genres, styles and eras. What’s needed is a database that can plot the common factors in billions of different sets of tastes.

Reaching the holy grail of digital personalization is being accelerated by online services such as Musimap, a  search tool that provides real-time music recommendations for listeners. Musimap’s algorithm comprehends music, and emulates the complex emotional interaction that humans have with music. According to its creators, Musimap’s “emotion-sensitive algorithm senses, reasons and responds to music as humans do.” The service’s APIs enable clients to achieve personalized recommendation accuracy and enhance their experiences.

Musimap maps titles with 55 weighted variables to each music unit (e.g., tracks, genres, labels) to enable analysis and real-time recommendations. Its set of four APIs utilizes a database of more than two billion data points, 700 million relations, 50 million tracks, and four million artists in a fraction of a second to provide customers with a prescriptive, suggestive and instructive music intelligence. Such technology allows music discovery at scale, as well as the creation of advanced music applications from hands-free playlist generation to hands-on intuitive exploration and navigation.

The service was launched by Belgian sociologist and musicologist Pierre Lebecque, based on a synthesis of an interactive music taxonomy model he had been building since 1986.

He created a database that acted as a repository for every published piece of music in the world, serving customers from streaming services to music promoters and restaurants. In fact, Musimap anticipated the rise of streaming services almost three decades ago and its current technology offers new growth opportunities for these services (and beyond) via a deeper, emotion-based interaction between end user and content. That emotion-based interaction is likely to be increasingly be in demand in the Internet Of Things era.

Lebecque’s original idea was for each artist and track to be linked in an equation and relationship of influence.

“If we take James Brown, for example, we can identify that his influences were gospel, the sermons of a preacher, soul, a binary African rhythm…and all these influences have produced a movement: funk,” Lebecque explained in a case study from Neo Technology, the company behind the Neo4j graph database. “As the range of rhythms or emotions is limited, it is therefore perfectly possible to mathematically formalize each title, and from this, to map any musical production within a network of interwoven influences.”

To accomplish this mapping, Lebecque’s team first built a solution in a standard SQL database, but the database experienced performance issues as the size of their database grew. It also became clear that a visual depiction of data was needed. The company sought to decode the DNA of music to be as exhaustive as possible in its title descriptions to enable complex searches in real time.

To address this challenge, Musimap employed the Neo4j graph database for a music recommender system. The company had ruled out other types of databases for reasons of performance. Graph databases, on the other hand, are highly scalable and capable of delivering real-time information.

Musimap developed and implemented a business model that would enable both the creation of a recommendation algorithm — used by companies to create playlists and categorize their catalogues — and assistance with creating film music, a service aimed at audio-visual professionals that provides guidance based on movie genre. The company was able to define an advanced search mode based on multiple criteria, such as rhythm, instrumentation, 400 complex moods and 100 listening contexts. This provided the tool with the ability to provide recommendations based on nuanced emotions for customers’ unique requests. .

As a result of its Neo4j graph database implementation, Musimap was able to step up its service delivery to customers. Via a newly-developed API, the company was able to import and personalize its database.

Processing and search times were reduced more than tenfold, while system availability was stepped up to a 24×7 basis. Search processing time is now virtually real time, and there is no longer a limit on the number of data points, the Neo Technology case study reports.