Home / Internet of Things / Why Gartner’s Down on the IoT, for Now 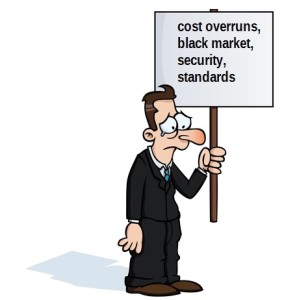 The IoT faces several challenges before it can realize its potential.

For fans of Saturday Night Live, the “Debbie Downer” character has a knack for making even the most joyous occasions reasons to see half-empty glasses all over the place.

Gartner has decided to step into Debbie Downer’s role for the emerging Internet of Things, looking at all the potential land mines that await enterprises embracing this new frontier. While Gartner is ultimately bullish about the sector, it laid out four big IoT challenges:

According to Gartner, three out of four IoT projects will face schedule extensions, taking twice as long as planned to complete.

“The more ambitious and complicated the project, the greater the schedule overruns,” the analyst firm notes in a recent statement. “For some projects, compromises will be made to keep them on-schedule, leading to significant weaknesses in performance, security or integration into existing processes. In the mid-to-long term, these compromises will require that the IoT project be refactored and perhaps even recalled and redeployed.”

Gartner analyst Alfonso Velosa says there will be complications as enterprises scramble to launch smarter, connected products. Adding to this will be people issues – IoT efforts “will be complicated by emerging business models that will require process and cultural change.”

Beyond cost overruns, IoT will also witness a great deal of ugliness as well. The IoT space will be rife with scamming and scheming. Gartner predicts that by 2020, a black market exceeding $5 billion will exist, pushing fake sensor and video data for enabling criminal activity and protecting personal privacy.

Security costs themselves will be driven to new heights – adding up to 20 percent to annual security budgets, Gartner predicts. Right now, that figure stands at one percent.  In other words, the risks of hacking and data breaches have created an entire new industry for IoT security.

“Major cybersecurity vendors and service providers are already delivering roadmaps and architecture of IoT security, in anticipation of market opportunity,” according to Gartner’s Earl Perkins.

Related: Three Ways the IoT Can Be hacked

3. Stream processing and the data deluge

Event stream processing is also another area that will need to be developed. “Some IoT applications will generate extremely high data rates that must be analyzed in real time,” according to another Gartner statement. “Systems creating tens of thousands of events per second are common, and millions of events per second can occur in some telecom and telemetry situations.” There will be a greater need for distributed stream computing platforms, which typically use parallel architectures to process very high-rate data streams to perform tasks such as real-time analytics and pattern identification.

Analytics approaches also will need to be rethought, Gartner advises. IoT business models will exploit the information collected by things in many ways — “for example, to understand customer behavior, to deliver services, to improve products, and to identify and intercept business moments.” However, new analytic tools and algorithms are needed, and as data volumes increase over the next five years or so, “the needs of the IoT may diverge further from traditional analytics.”

Of course, standardization is another hurdle to IoT, with multiple devices from multiple manufacturers each adhering to their own way of connecting. Standards and associated APIs need to be developed because IoT devices will need to interoperate and communicate, and many IoT business models will rely on sharing data between multiple devices and organizations.

“Many IoT ecosystems will emerge, and commercial and technical battles between these ecosystems will dominate areas such as the smart home, the smart city and healthcare,” Gartner cautions. The firm states that companies will have to develop variants of connected environments to support multiple standards or ecosystems, and be prepared to update products during their life span as the standards evolve and new standards and related APIs emerge.

And now the good news…

For all these IoT challenges, Gartner is actually bullish on the sector, predicting that total IoT services spending will reach nearly $235 billion this year, a 23 percent increase from 2015. Furthermore, within the next four years, more than half of major new business processes and systems will incorporate “some element of IoT.”

White Paper: How to ‘Future-Proof’ a Streaming Analytics Platform
Research from Gartner: Real-Time Analytics with the Internet of Things
E-Book: How to Move to a Fast Data Architecture
The Value of Bringing Analytics to the Edge
IoT Interoperability: An Internet of Broken Things
Finding Business Value in IoT Services